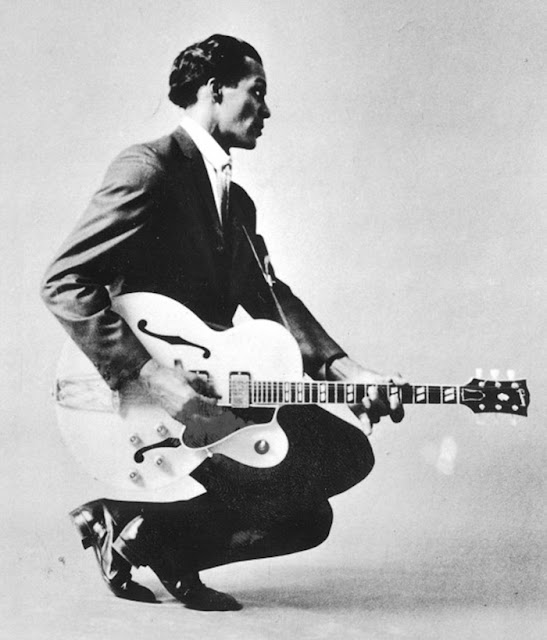 Chuck Berry is dead.  The rock and roller who first broke through 61 years ago (yes, really), died aged 90.  He reportedly had a new album ready to release, for his 91st year.  Old rockers, they never retire.
His famous ‘duck walk’ allowed dancing with the guitar, it fused rock music and dance music into one.  Because those simple, percussive melodies demanded to be danced to.
Despite experiencing (sadly inevitable) discrimination over his race (radio stations often didn't know he was black, they wouldn't have played his songs, had they known), and serving a stretch in federal prison, Berry’s songs remained irrepressibly joyous, romantic and with a mischievous sense of fun.


He had a noble and varied film career (check IMDB for the loooooooong list of films and TV shows in which his songs have featured) , which began when he appeared in the bandstand film Rock, Rock, Rock in 1956 (just a year after Marty McFly first played Johnny B. Goode, ahem).  Due to an admin error, the film is in the public domain in The States so, if you’re there, you can find the whole film on the YouTube.  UK viewers will have to be a bit cannier than that.
However, Berry’s performance can be found here:

The song serves as a sequel to his first hit, Maybelline.
Berry had a more substantial role in the follow-up film, Go Johnny Go (1959) which, of course, took its title from Berry’s massive hit from the previous year: the afore-mentioned Johnny B Goode.
The title sequence, and that special version of the song, can be watched here:

Johnny B. Goode is really Berry’s own story.  The song of a backwoods boy done good.  But he had to distance himself from the story in the lyrics.  As Rolling Stone noted here:

“Johnny B. Goode was the first rock & roll hit about rock & roll stardom. It is still the greatest rock & roll song about the democracy of fame in pop music. And Johnny B. Goode is based in fact. The title character is Chuck Berry -- "more or less," as he told ROLLING STONE in 1972. "The original words [were], of course, 'That little colored boy could play. I changed it to 'country boy' -- or else it wouldn't get on the radio." Berry took other narrative liberties. Johnny came from "deep down in Louisiana, close to New Orleans," rather than Berry's St. Louis. And Johnny "never ever learned to read or write so well," while Berry graduated from beauty school with a degree in hairdressing and cosmetology.”

Since the 1980s (at least in The States) was all about wanting to be the 1950s, Johnny B. Goode became something of a signature tune for that decade too.
Not least because of this:

You may not remember, however, it was featured twelve years earlier in the first piece of childhood nostalgia from one George Lucas - Namely, American Graffiti (1973).

In the same year, an even more off-grid use was found for Berry’s first hit, Maybelline in Ralph Bakshi’s experimental animation, Heavy Traffic.

So, Berry's music was the spark for nostalgia in the 70s and the 80s.  No surprise, then, that this was also true in the 90s, when Tarantino dug deeper into Berry’s discography (as he is wont to do) and unearthed You Never can Tell for use in Pulp Fiction, his wonderfully mashed-up love song to American popular culture of the 40s, 50s, 60s and 70s ...
You remember:

In the film Cadillac Records (2008), Mos Def does a fantastic job of impersonation, bringing young Berry back to life.