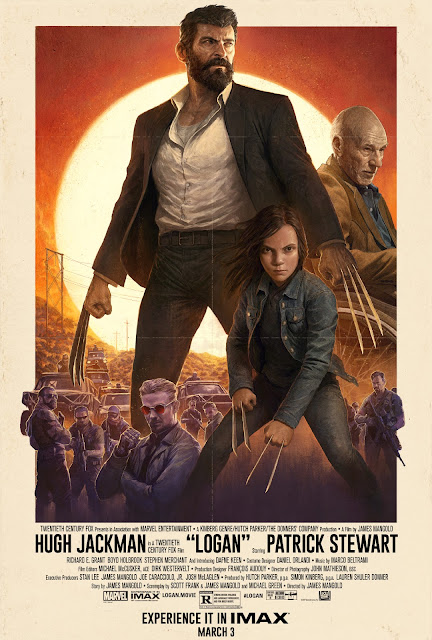 This is the end.  The end of an era.
When Bryan Singer’s X-Men came out in 2000, it was the first expression of Marvel’s upcoming domination of the box office.  Superhero films were, up to that point, so thin on the ground that they hardly constituted a genre.  Yes, Men in Black (1997) and Blade (1998) were based on comics, but they weren’t superheroes, they were science fiction and horror respectively. Whilst far from perfect, X-Men was shamelessly superheroic and, at least for this old Marvelite, an important part of its appeal was the casting of unknown singer Hugh Jackman as Wolverine.  He just got it.  Comic-book Logan is squat and Canadian, Jackman is six-foot and Australian, but that didn’t matter, he had the attitude and the first time those claws went snikt, I was hooked.


Well, 17 years later, Wolverine has snikt for the last time.


He needn’t have bothered.

His cameo in X-Men Apocalypse (2016) closed the circle on the character, preceding (albeit by some distance) the cage-fighting scene which introduced him in the first film.  That would have left the fans satisfied, yet wanting more.  Logan left this fan regretting getting more.
Okay, the disappointment set in early when it became clear that they couldn’t actually make a direct adaptation of Mark Millar’s comic book Old Man Logan (2008) because, as usual, Marvel and Fox were bickering about rights.  The lawyers won’t let Wolverine appear in the same film as Hulk and Hawkeye, who were major players in OML.  I understand that, but it would not be beyond the wit of man to adapt the story with the assets they do have.
That said, they still can't summon the gumption to give screen credit to Len Wein, John Romita and Herb Trimpe, who created the character of Wolverine ... But that's another story.
The original OML was set in an America that has been divvied-up between super-villains.  In the film version, the only authority seems to be the private army of Alkali Transigen, the loosely-sketched-in corporation (which takes its name, in part, from the military installation where Wolverine was created).
Logan really is an old man (knocking on 200 years, if you recall the opening of the first solo Wolverine film) and, in this story, he starts out weary, with a limp, infected wounds on his knuckles that no longer heal properly, an alcohol problem and, the ultimate indignity, a part-time job: the Übermensch has become an Uber driver.
These early scenes give us a few firsts: it’s the first time Wolverine is allowed a proper 15 certificate potty mouth and it’s the first time we really see his ‘berserker rage’, when his violence becomes unrestrained and prisoners are not taken.  We also get to see Jackman doing the best, deepest, most emotionally exhausting acting of his career.  Unfortunately, we don’t get to see any of the humour that he usually brings to the role.  Boy, does this film need humour.

It starts bleak and proceeds through bleaker, with just the occasional pit stop at grim and hopeless, before arriving at bleakest-of-all.  The central performances of Logan and Xavier (played once again by Patrick Stewart, on positively Beckettian form, here) are key to the viewer’s involvement with the film, and here they are both weak, embittered and cynical.  It doesn’t work when they are both like that, there needs to be some light and shade.  The little girl, Laura, is added to the mix and, whilst the performance of 12-year-old Daphne Keen is excellent, she isn’t given much to do, save scowl a lot.
Even Stephen Merchant’s Caliban, who essentially serves as mother in their twisted little family, doesn’t get the chance to be the comedy relief one would expect.  His character is just as worn-down and haunted by events (which we haven't seen) as the others.  Yes, this really is a laugh riot this one.

Richard E Grant returns to the world of English-character-actor-playing-villain-in-Hollywood-movie and, to his credit, gives a relatively calm performance (I still haven’t forgotten his eye-rolling, foaming, scenery chewing in Hudson Hawk in 1991).  The problem is that his role is one of the many things in the film which are sketched or hinted at, but not fully explained.  His authority seems to be all-encompassing and, in his one dialogue scene with Logan, it seems that he’s the son of someone that Wolverine killed - but that isn’t his motivation for pursuing Logan.  So why mention it?
I felt that all of these back-stories were more interesting than the on-screen story.  Apparently no new mutants have been born for 25 years (which put me in mind of 2006’s vastly-superior Children of Men).  Furthermore, Xavier’s developed a mental illness which led him to commit some hinted-at heinous act, which resulted in a lot of mutant and human deaths, hence why he and Wolverine are on the run.  I wanted to know why there have been no new births.  I wanted to see the end of Westchester school and the fall of the mutants.  Either of those stories would have been more energising than this story.
There are also plenty of lost opportunities here.  There are suggestions that Professor X is the really dangerous one - Grant refers to “a degenerative brain disease in the world’s most dangerous brain”, but this isn’t fully developed.  The brief moments where Logan and Laura fight side-by-side are electrifying, and immediately put me in mind of Lone Wolf and Cub (not to mention Big Daddy and Hit Girl), but the fight scenes are messy and poorly-resolved.  They’re like real fights, in that sense, but I don’t watch superhero movies to see the real world, I watch 'em to bask in the possibility of a world where problems are easily resolved and heroes actually exist.  There is an elegant, epic aesthetic to superhero comics, and the best films based on them.  This film lacks that.

With one or two exceptions, every plot development is telegraphed well in advance.  Logan has an adamantium bullet, which is the only kind that will definitely kill him.  One might call it Chekhov’s Bullet.  He has a persistent cough.  Well, we all know what that means in a movie.
Something else that annoyed me is the (oh so common) problem that anyone who crosses the path of our protagonists inevitably get killed.  Guilty and innocent alike.  Have we learned nothing from Joss Whedon?  But then, I suppose, any film that takes its cues from Alan Ladd’s 1953 horse opera, Shane (the really soppy bit at the end) and the wrong bit of 1985’s Mad Max Beyond Thunderdome (the bit with the kids) has got fundamental problems.
The film does touch on some thought-provoking themes, but doesn’t explore them.  So, families have essentially ceased to have any value in corporatised America, they are simply inconveniences, obstacles in the march of corporate progress.  They are unAmerican!  Children are no longer the focus of the American dream; they are manufactured “things with patents and copyrights”.  There’s a heavy-handed metaphor about taming wild horses at one point,
Also, all of the new genetically-engineered mutants are Mexican, and their story is one of them fleeing across America towards Canada.  So, the racial difference of mutants has now been made more overt and America has become a place that minorities travel through but in which they are not welcome.  That’s a massive theme that could have been fruitfully developed further (especially in view of political events of the last year in the real States) but America barely features in this film, save as an indistinct back-drop for the action.

The tone of despair and despondency at the film’s beginning would be far more effective (and affecting) if Logan’s actions made any difference to it but they don’t.  He isn’t Wolverine anymore, he isn’t a hero anymore, he’s just a beaten old man, and he stays that way.  I found myself wondering why are they all struggling so hard to stay in a world that is so unrelentingly awful?  It feels like the characters who die are well shot of the world, which does tend to undermine the tragedy.
I appreciate that Mangold and Jackman tried to do something different, a grown-up superhero film which deals seriously with some grown-up issues.  I appreciate that Jackman and Stewart have purposefully given subtle, layered and pain-filled performances.  But the drama is miss-handled throughout; from its loooooong and poorly structured first act, to its inevitable second act and its confused, unsatisfactory conclusion.  Sadly, this is a disappointing end to Logan’s run.

Postscript:  In the interest of balance, it's worth noting that pretty much every other reviewer out there is of one mind.  The film's a masterpiece, apparently.  Obviously, it's one of those occasions when I didn't see what others saw.  That's fine.  Worth mentioning, though, that the film gets Len Wein's seal of approval.  Fair enough.