THE CELLULORD ON STAGE - ACT THREE

And so it came to pass that I was asked to introduce 'Anonymous'.  This film, written by John Orloff and directed by Roland Emmerich, tells the story of the political intrigue surrounding Queen Elizabeth's court in her dotage and how this impacts on one nobleman's secret desire to write plays, necessitating the use of a 'font', namely one William Shakespeare.
Now, whilst this is the first film to deal with the idea, it is very far from a new idea, so my introduction looked into the whole matter.
So, to begin, we all know what William Shakespeare looks like, yes? 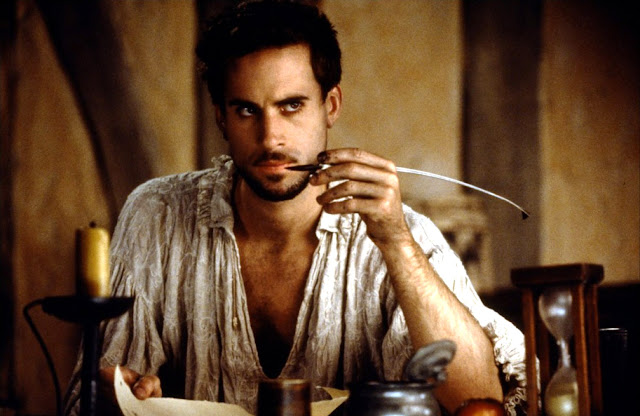 He looks a bit like Voldemort’s younger brother …Or, if you’re a Doctor Who fan ... 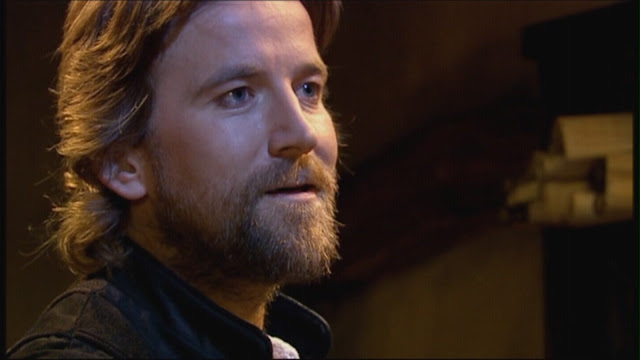 ... You probably think he looks like that bloke off Shameless who does the Homebase ads … 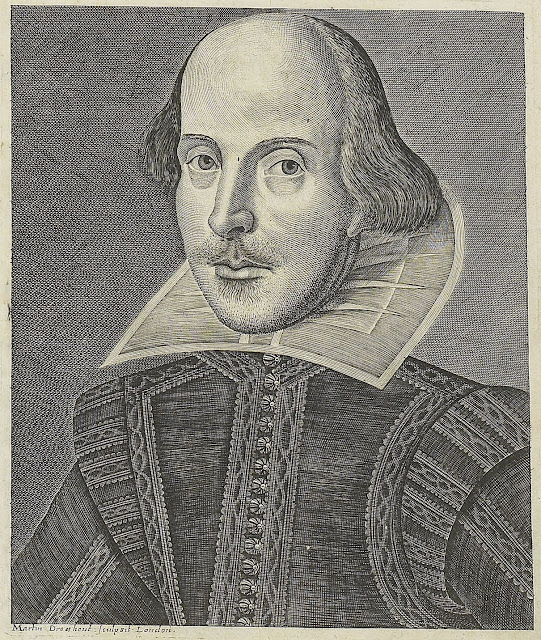 This is the most famous likeness of Shakespeare … It is an engraving by Martin Droeshout – This engraving was published in the so-called ‘folio’ – the first collected edition of Shakespeare’s works – published in 1623, seven years after he died.
The only other portrait that is considered ‘legitimate’ is that on his Funerary Monument which is inside Holy Trinity Church in Stratford. 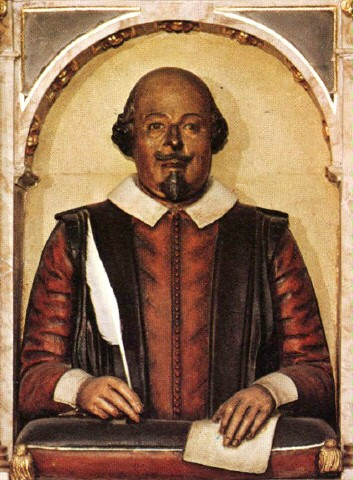 As its name suggests – this was also created after his death – but before the folio was published – because the intro to the folio mentions the Funerary Monument, so we know that was there first!
But both of these portraits were created from memory AFTER Shakespeare died!
There are various paintings which claim to be of Shakespeare and to have been painted in his lifetime – but most are completely dismissed by academia – except: 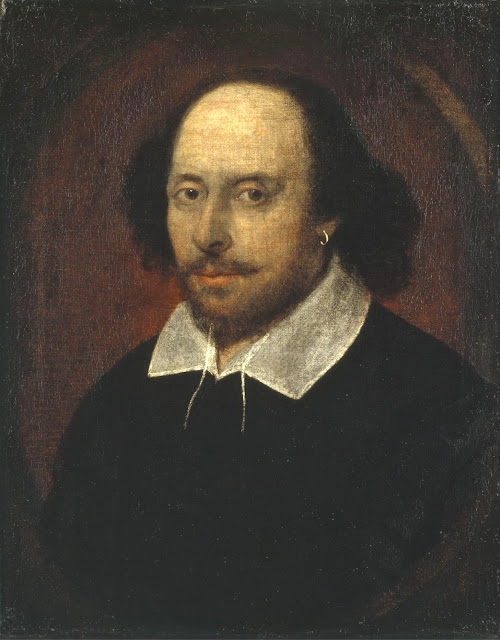 The Chandos Portrait, painted in 1610 by John Taylor (not the Duran Duran bassist – but the Elizabethan painter … Of whose work no other examples exist)  This is the one that The National Portrait Gallery has put its weight behind.
But then – in 2009 – another painting was discovered … Claiming to have been painted in 1610 also! 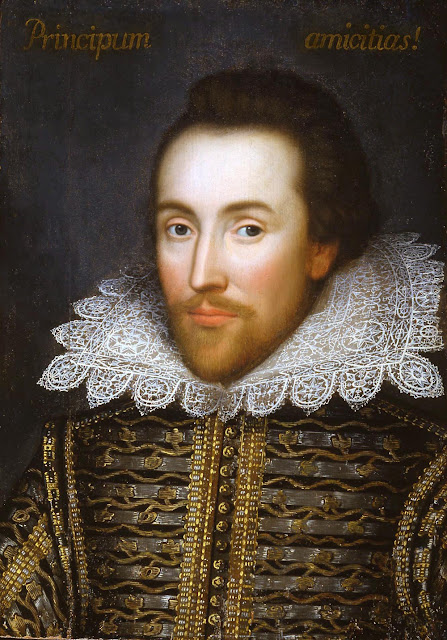 Called The Cobbe Portrait – It is further claimed that this painting was copied for the Droeshout Engraving. 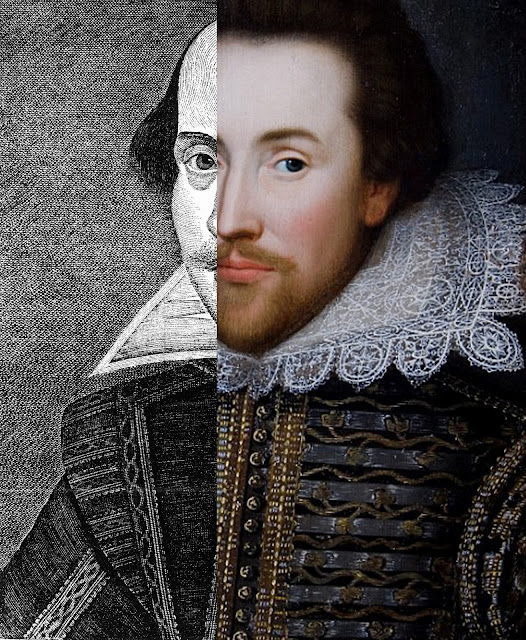 The National Portrait Gallery thought, don’t like this idea … they maintain that this is ACTUALLY a bloke called Sir Thomas Overbury … Who was famous for a sex scandal that got him imprisoned in the Tower, where he died – but that’s another story.
Is it credible that a painting could have hung on a wall for 400 years without anyone clocking that it was Shakespeare? Well, The Cobbe collection includes works handed down from the family of the third Earl of Southampton, Shakespeare's only known patron.
So, how come there are no DEFINITIVE portraits of the country’s greatest playwright?  And how come those portraits we do have … all look different?  That kind of uncertainy is exactly where conspiracy theories spring from!
See, this is not a new idea …
At the time of his death, Shakespeare was considered a great writer – but not THE GREATEST … Indeed – his works were adapted and re-worked many times over the years … No one saw his texts as Holy Writ … Personally I’d LOVE to see 1681 version of King Lear … with the happy ending! 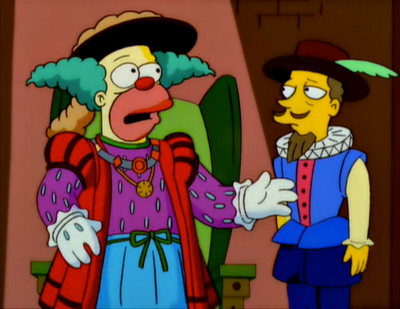 Indeed, Shakespeare had been dead and gone a century before his works reached the heights of their popularity.  By the time of the Licensing Act of 1737 – one in four of the plays on in London was a Shakespeare.  His plays began to be studied.  His reputation spread across Europe.
In 1785 a scholar named James Wilmot could find no evidence that Shakespeare had ever written anything so decided the plays must have been written by the philosopher, lawyer and scientist Sir Francis Bacon. 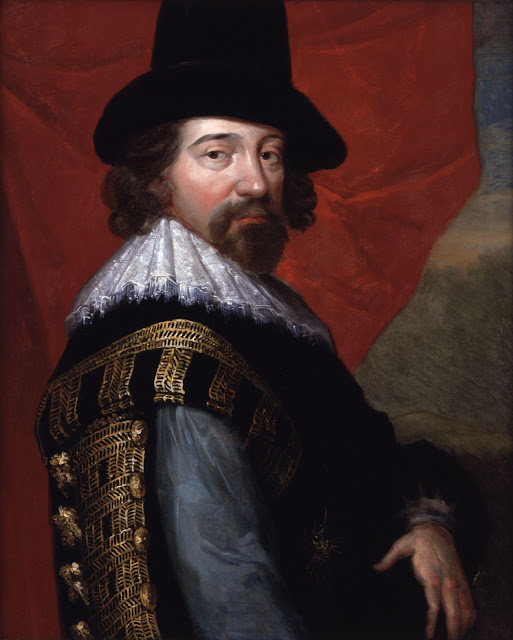 Further fuel was added to this when it was realised that Bacon stopped writing under his own name in 1613 – when he became full-time Attorney General.   This was two years after Shakespeare supposedly wrote his last play, and three years before he allegedly died!
By the mid 1800s, when science was suggesting that we were evolved from apes, not Adam and Eve … And historians were beginning to wonder if The Bible was really written by God … Or if Jesus ever actually existed … A fella called Samuel Schmucker (!) wrote a book called Historic Doubts Respecting Shakespeare -  it was meant to be a satire of other historical studies … But he inadvertently started something.
The flood of Shakespearean Authorship Doubters … Began with a woman.  An American. 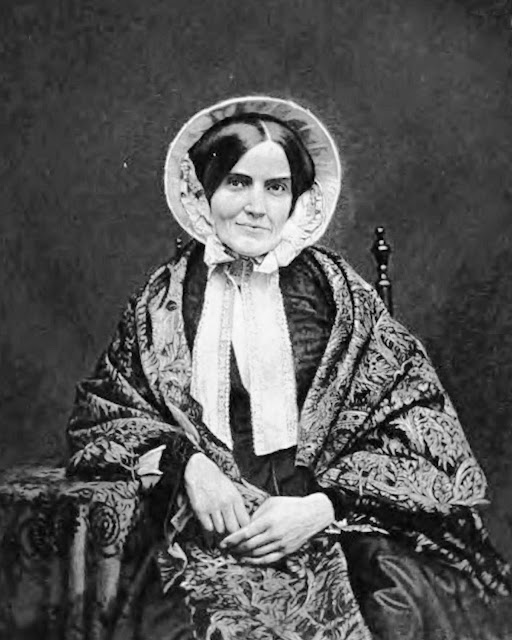 Delia Bacon was her name – rather improbably … And she believed she had evidence that Shakespeare’s plays were actually written by a gang, a committee of famous playwrights and dignitaries – led by Sir Francis Bacon (no relation) and Sir Walter Raleigh! 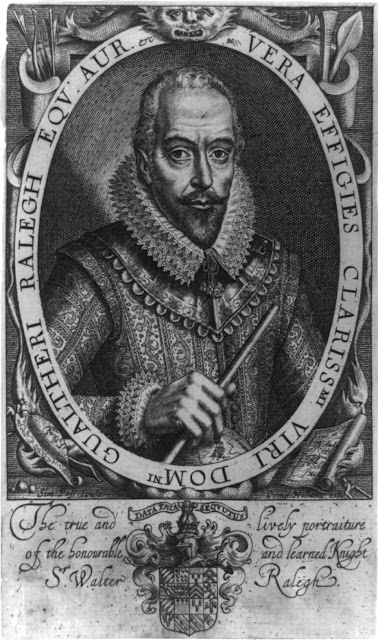 Or: As you may remember him from the movie, Elizabeth: 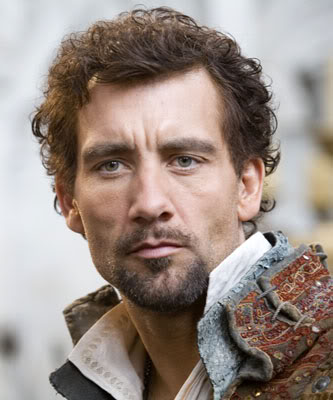 Anyway, the problem with this theory is … Well, have you ever read anything written by a committee? Best plays ever?  I don't think so.
But this unlikely idea didn’t go away … Books continued to be written, investigations undertook and, as late as the 1930s, bodies were being interred for ‘proof’ of Shakespeare’s identity.  However – proof – whether for or against … Continues to elude historians!
This isn’t helped by the fact that Shakespeare himself didn’t seem to know who he was – since, in his signatures, there are 25 different spellings, such as ...
William Shakspere      Wm Shaxpere
Wm Shaxberd     William Shakspear
William Shakspēr      Willm Shakp
Wm Shakspē      William Shakespeare
Willm Shackspeare      Willm Shakp
By me William Shakspeare
Of course, there is a long-standing conspiracy that the serious search for alternative authors is being suppressed, as though by some pernicious orthodox organisation … A sort of Stratford Association of Shakespeareans … Or SAS!
Another conspiracy believes that Shakespeare was REALLY Christopher Marlowe … 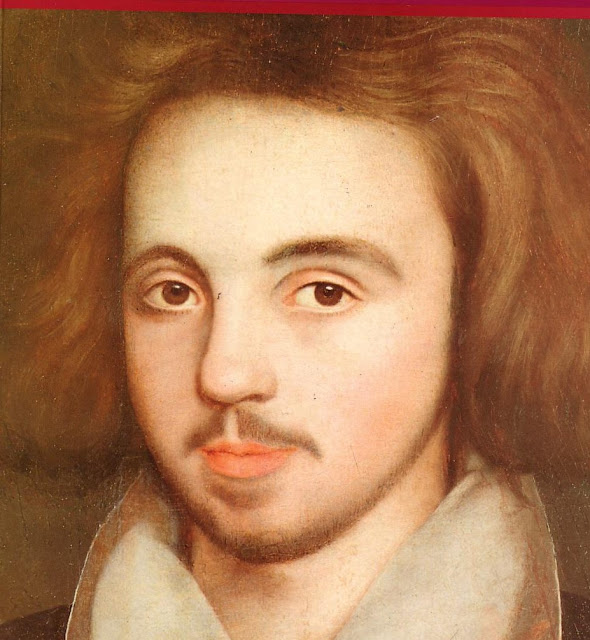 The fact that Marlowe was killed in a pub fight fully 20 years before Shakespeare stopped writing doesn’t deter these conspiracy theorists … Because, they point out, Marlowe was a spy, working for Queen Elizabeth – and being officially ‘dead’ gave him the perfect cover to be both a spy AND Shakespeare’s ghost writer.
You see … there is a problem which just won’t go away – How did a self-educated dealer in grain and wool from the Midlands, rise through the London ranks from actor to director to the greatest playwright and poet to ever walk the boards?
Some people simply can’t accept this … They feel that Shakespeare MUST have been from the educated nobility.  And there have been A LOT of famous fans of this theory … 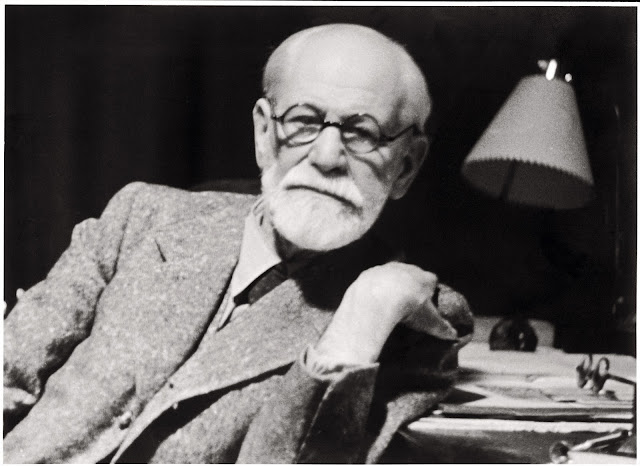 Sigmund Freud wrote: “It is undeniably painful to all of us that even now we do not know who was the author of the Comedies, Tragedies and Sonnets of Shakespeare”
Looks like he’s reclining on his own couch here! 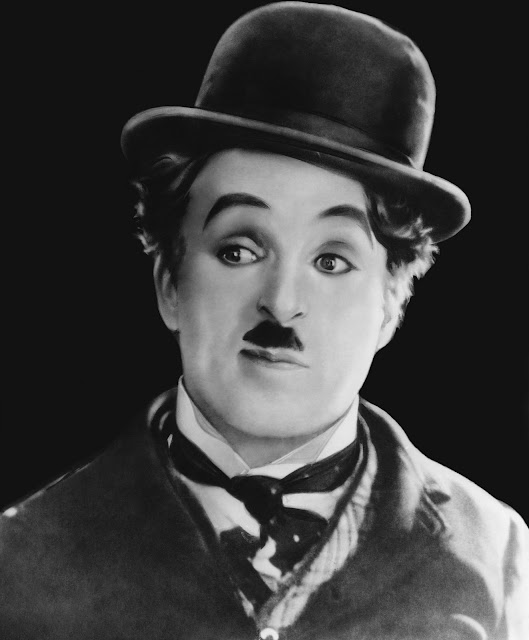 Charlie Chaplin wrote in his autobiography:  “I am not concerned with who wrote the works of Shakespeare … but I can hardly think it was the Stratford boy. Whoever wrote them had an aristocratic attitude.” 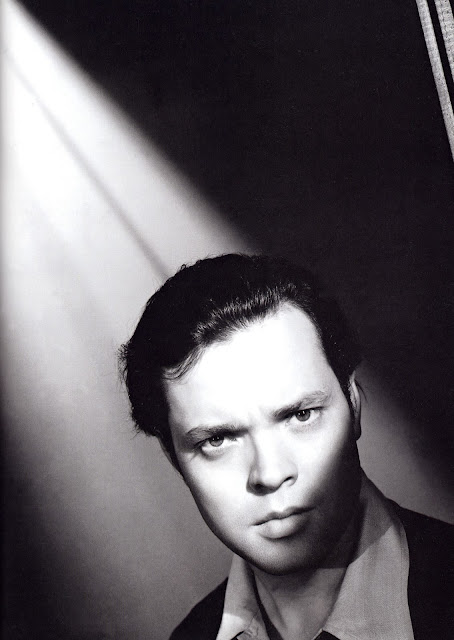 Orson Welles commented: “I think [an alternative candidate] wrote Shakespeare. If you don't, there are some awfully funny coincidences to explain away.” 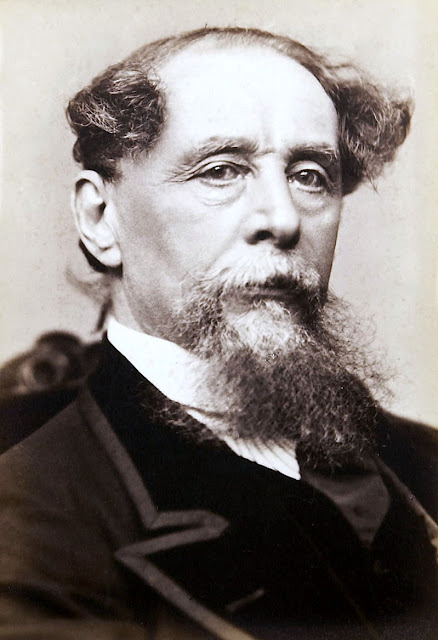 But let’s leave the last word to Charles Dickens … Arguably the SECOND greatest person ever to put pen to paper in Britain:  He said - “The life of Shakespeare is a fine mystery and I tremble every day lest something turn up.”
There are A LOT of theories about who Shakespeare was … NONE of the ones I have mentioned appear in the film you are about to watch … They have gone for a very different explanation.  They may be right.  We have no way of knowing.
For what it’s worth … I think I know who wrote the greatest literary works ever in the English language … Isn't it obvious? 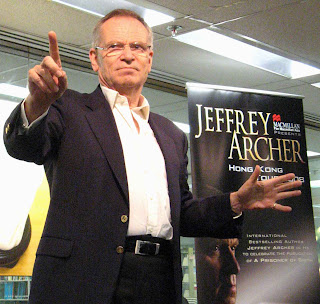