"THE TWO AND ONLY" JANE RUSSELL RIP 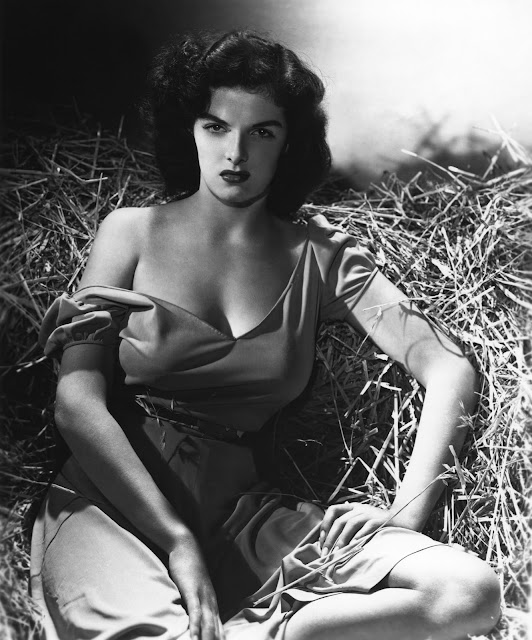 You'll have to forgive me for using this as an opportunity to exploit some glamour on my weblog, but Jane Russell was accustomed to being exploited.  She was, to my mind, the model for the modern celebrity.  Here, in the 21st century, where fame is pursued aggressively by an entire generation of young people who have been raised to believe that life doesn't happen unless it happens in the headlines, where children are snatched from obscurity and thrown to the tabloid wolves by Svengali-like figures on a monthly, almost weekly basis, being exploited has become an acceptable, even aspirational, norm.

Justin Bieber became famous, apparently, by posting himself on YouTube.  He was desperate to be exploited and now, at the tender age of sixteen, he has his wish.  By the time he's seventeen, of course, the nano-second attention-spans of his fan-base will have very-likely moved on to the new shiny object.  But he'll never be entirely forgotten.  That's the thing with being famous ... it means that, however inconsequentially, you get to leave your fingerprints on our culture.

Jane Russell found her Svengali when she was just nineteen.  She died this week, seventy years later, and her fingerprints are still all over our popular culture.  Rather like the post-Madonna pop-stars (Kylie, Beyonce, Rihanna, Fergie, etc) she was as famous for her underwear and what she put in it, as she was for her actual talent.

It would be easy to see her as a victim of an exploitative, sexist, media machine, especially since her fame came at the behest of the notoriously weird millionaire Howard Hughes, who became obsessed with her photograph or, more precisely, with her extraordinary breasts.

He created the film The Outlaw for her in 1943 and propelled her into the public consciousness through an ad campaign that was far too raunchy for the censorious attitudes of the time. 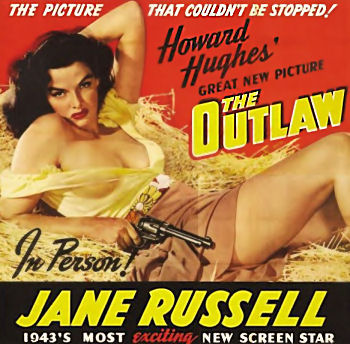 The original poster, with its come-hither, roll-in-the-hay promise and cunning, vaguely Freudian, use of sexual symbolism is available in various forms, some of which are more 'acceptable' than others.  Of course, as is often the case, the censored version - which replaces the gun with a bullwhip - could be considered far more provocative than the original. 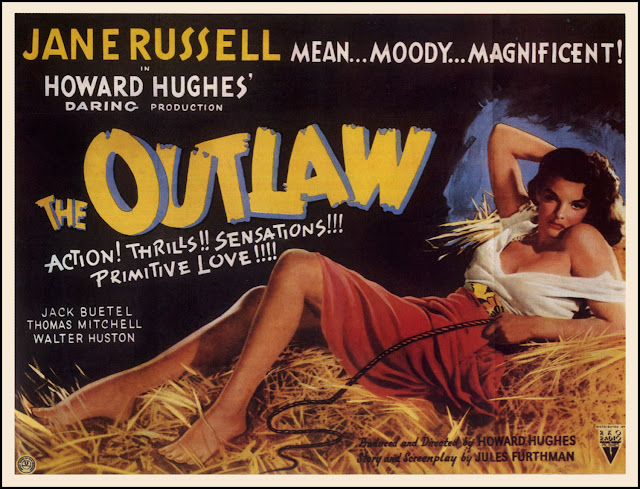 That cleavage and that steely stare were to propel Russell into a career that many young girls would die for.  The thing is; she was never really 'A list'.  Hers is not one of the names you think of when considering the great actresses of the period (and there were a lot of great actresses during the war years, that really being the only time in Hollywood history they were given an equal share of the spotlight) and I think this is because she had the raw sex appeal of a Monroe with the intelligence and attitude of a Bette Davis and, consequently, failed to fit into either stereotype.

People forget that the prophetically entitled Gentlemen Prefer Blondes (1953) was a starring vehicle for Russell.  Marilyn Monroe was merely the supporting role, but her sexuality combined with her vulnerability propelled her to an iconic status of which Russell could only dream.  Even the publicity shots for the film - such as the rather ungainly handprints-outside-Grauman’s photo below - put the emphasis very much on Monroe. 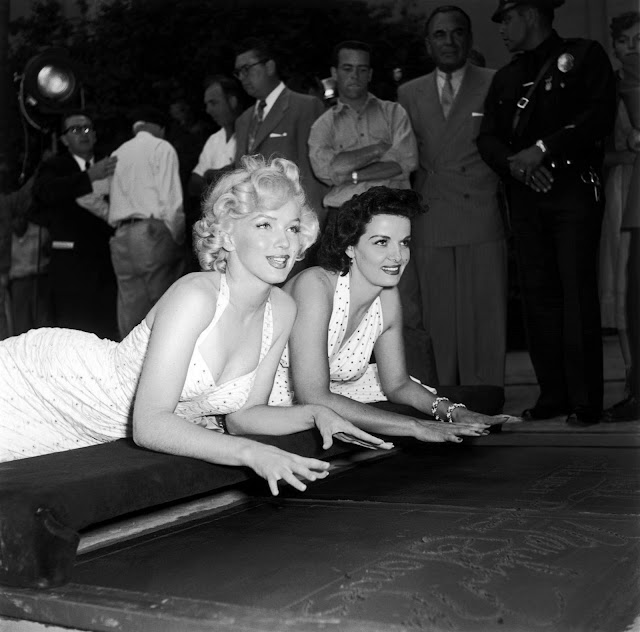 You see, Monroe fed men's rescue fantasies.  She seemed lost and at risk and completely dependent on the kindness of men.  Russell had no such vulnerability.  She was taller than a lot of men and had that smart, intimidating stare.  Men, of course, were (and very much still are) the decision-makers in the entertainment industry and their taste ran more to the ditzy, self-destructive blonde than to the witty, self-confident brunette.

Compare the famous, iconic image of Monroe from the film: 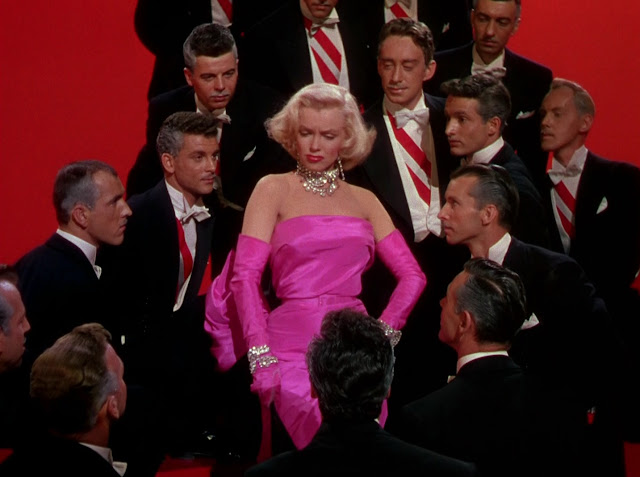 ... To this frankly ominous publicity shot of Russell for the same film: 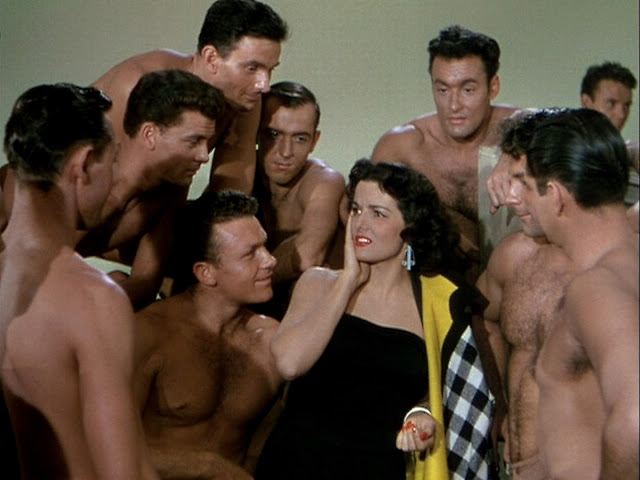 ... And draw your own conclusions about the way she was perceived.

Russell understood the way the wind was blowing and she didn't make another significant film after 1957, effectively bringing an end to her short, notorious career.  Ironically, once she was below the celebrity radar, she proved to be far more vulnerable than she appeared and, like Monroe, sank into alcoholism which resulted in her reappearing in the headlines in 1978 when she was jailed for drunk driving.

Her later years were marked by her outspoken Right Wing politics and Christianity, but she clearly never lost her sense of humour, describing herself as "a teetotal mean-spirited Right-wing conservative Christian bigot".

Possibly with that in mind, the Daily Mail has written an excellent obit for her here and The Guardian has gathered together some clips of her more famous acting moments here. 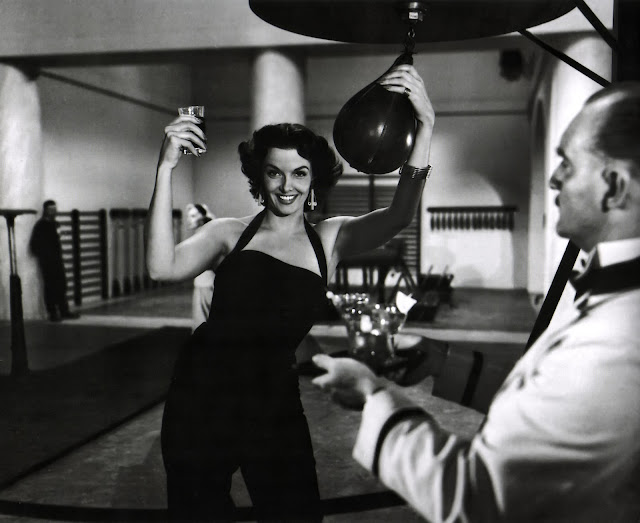