.
This is fascinating viewing. The Hollywood Reporter has gathered a round-table of directors, all of whom have films hovering around during Awards Season. Some of the films haven't been seen in the UK yet, some of the names aren't exactly household, but the issues they've dealt with are soooooo familiar.

They talk about the vice-like grip of the MPAA over the 'adult' content of their films, they talk about making films cheaply and quickly (something which, in these days of $200 million budgets, seems novel) and the whole thing is deeply inspirational. See Derek Cianfrance talk about how it took him twelve years to get Blue Valentine made and, now he has, its NC17 rating will likely kill it in The States.

See Peter Weir discussing the art of direction, see Tom Hooper talking about not being a writer/director, see Darren Aronofsky talk about developing The Fighter then handing it over to David O. Russell, see ... for yourself.

It'll take about an hour of your life, but will reward you disproportionately!


In case you're curious, the Nikita picture that they discuss (in relation to the censorship of sex but not violence on American TV) is this one: 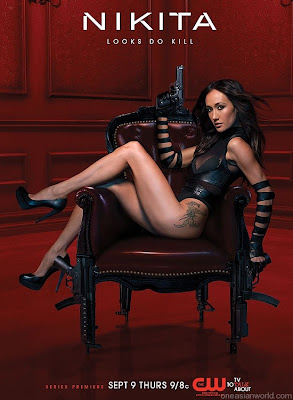