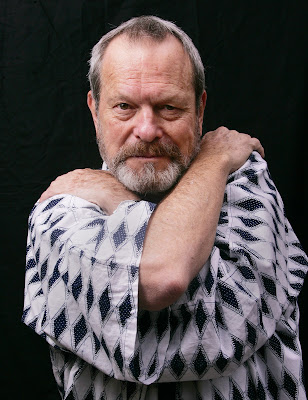 So, one of my three favourite Minnesotans (the other two having the surname Coen) is enjoying a burst of productivity.

Last April it was announced that he was going to be directing a stage opera next May.  All the, as you young people say, skinny is here at Dreams, the semi-official Gilliam website run by the very great (and infinitely patient) Phil Stubbs.

Since that announcement and now, Gilliam has been busy making what is essentially a commercial for Pepsi's 'energy' drink Amp.  It's called The Legend of Hallowdega.  The official website with lots of 'behind the scenes' (i.e. 'carefully edited') footage is here but the film itself isn't on the official website.  I guess the reason for that is just part of the whole Hallowdega mystery.

It's a fake documentary set in and around the NASCAR racetrack at Talladega and made in the style of Blair Witch (1999) and Spinal Tap (1984), although it isn't as funny as either of those.  Despite having a few Gilliamical touches - some nice wide-angle shots and a few distant echoes of The Fisher King (1991) and 12 Monkeys (1995) - its humour doesn't, sadly, rise much above the level of a corporate video.  The fictional host's name is Justin Thyme.  Justin ... Thyme.  I'll let the full comic majesty of that soak in for a moment.

This film is the sort of thing that would make a diverting three minute skit on The Onion's ONN or Funny or Die, but here it drags on for almost fifteen unfunny minutes.  I sincerely hope Mr. Gilliam puts the money to good use then, at least, this can of luke-warm piss will have served some purpose.

Anyway, if you can but be bothered, happy viewing ...

Now, moving on ... Just last week, I stumbled across this intriguing piece from Screen Rant.  They claim that Gilliam is going to be working in an advisory capacity on a 'steampunk' animation called 1884.  This sounds like a fascinating production, a sort of Karel Zeman meets George Orwell meets ... Terry Gilliam.  Apparently the film has an £8 million budget.  In the present financial climate I think they'll be very lucky to get that much for something as art-housey as this, but I hope, for their sake, they do, because I certainly want to see this finished with Gilliam's finger-prints all over it!

There's a preview of it available, at just over four very, very interesting minutes.  See what you think:

There's a much more polished (and therefore presumably more recent) promo for it here.  Significantly improved, I think you'll find!

Then, earlier today, Bleeding Cool announced here that Gilliam is, in the next two weeks, going to shoot another short film, called The Wholly Family.   They then added an update to that news here, including extra information gathered by the ubiquitous Phil Stubbs.  We wait and see whether this will simply be another commercial job to earn a buck or, since its based on his own script, something altogether more interesting.

It looks like 2011 is going to be a productive year for Gilliam and I have always found that to be grounds for celebration.