“Never look back, Lawrence.  The past is a wilderness of horrors.”      - Sir John Talbot (Anthony Hopkins) 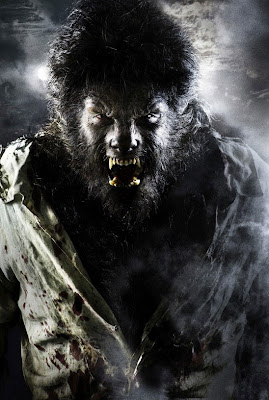 For some, the definition of Universal Studios is “the company that made the monster movies” even though that cycle ended almost seventy years ago.  I like Universal’s classic horror films!  They still stand tall and proud in the imagination from those far-off childhood days when I was allowed to stay up til 9pm to watch them.
I also like Universal’s more recent raidings of its corporate tomb, like  Francis Ford Coppola’s Bram Stoker’s Dracula (1992).  I’ll sidle nonchalantly past Kenneth Branagh’s Mary Shelley’s Frankenstein (1994), gazing innocently the other way, before admitting I also like Steven Sommers’ Van Helsing (2004)!  It’s a weird, unwieldy mish-mash of pulp fiction tropes and camp as a row of tents but it delivers.
What it doesn’t do is pay due deference to its source material.  Of course, one could easily argue that Universal itself didn’t treat its properties with appropriate respect, since the genre-defining monsters were all-too-soon reduced to playing straight men to Abbot And Costello.
Now The Wolfman has come along to redress that balance by using the finest of modern CGI effects to revisit the 1941 original.  Benicio Del Toro was obviously doggedly determined to play Lawrence Talbot, having stuck loyally with the project through a long, traumatic gestation and a last-minute change of director.  Initially, during the film’s long, slow first act, you really wonder why he bothered, since there’s very little for him to get his teeth into.
In terms of mood and mise en scène, the film has all the hallmarks of the original Universal horrors and their British Hammer siblings: the local village which is obviously a set, the moody, mist-shrouded forests of skeletal oaks, the dilapidated ancient monuments and statues hinting at civilisations long forgotten, the ancient circle of standing stones beside the gypsy camp and the snarling, drooling predator in the dark.
These latter two elements furnish the film with its first stand-out set-piece, as the beast attacks the gypsy camp with all the speed and ferocity of a lightning bolt.  It is a furry blur hurtling between caravans but, oddly, when you do catch a decent glimpse of it, it looks disappointingly like a man in a teddy-bear suit.  Bungle The Werewolf … be afraid!
But Hugo Weaving has no fear.  He turns up at the beginning of act two and the film promptly comes vividly to life.  He is playing Inspector Abilene of The Yard, fresh from failing to track down Jack The Ripper.  This is an interesting inter-textual cross-over which owes more to Alan Moore than Lon Chaney.  Weaving is wonderful, with his dignified cynicism and wry one-liners lifting the whole project into another league (not quite an extra-ordinary one, but you get my point).  His performance successfully changed my mind over a film which, by this point, I had all-but written off as a failure.
It’s at about this time that Anthony Hopkins (who had, up to this point, been sleep-walking through his role as Del Toro’s father, Sir John Talbot) suddenly becomes a much more animated character – giving Hopkins the chance to present us with another of his wonderfully wicked, casually evil performances.  Although, I still wonder about the thick Irish accent he (and only he) employs.
Other performers include Art Malik, who gives a confident and subtle performance with what could have been a horribly stereotypical character, Talbot The Elder’s Sikh manservant, Singh.  Meanwhile, Anthony Sher turns in a thankfully brief cameo as the stereotypically German psychiatrist in charge of the London asylum into which Talbot Jnr is confined.
Once transformed, the lycanthropic Del Toro quite deliberately bears a distant resemblance to Chaney’s and, unlike any other screen wolf I can think of (except, unfortunately, Michael J Fox’s Teen Wolf – 1985) Del Toro can still give a recognisable performance through the make-up.  Obviously it was important to make-up maestro Rick Baker (who, one hardly need mention, transformed all transformation scenes forever more with his still-remarkable work in An American Werewolf in London thirty years ago) to retain the subtle distinction between Man Wolf and Were Wolf. 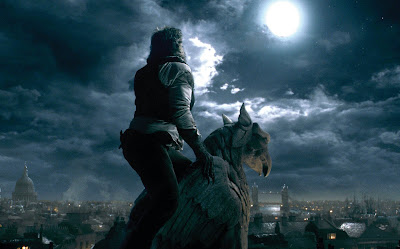 The film’s truly stand-out sequence comes when Talbot The Wolf cuts loose in old London town, one part Phantom of the Opera to two parts Murders at the Rue Morgue, the scenes of him galloping across the rooftops really do make you yearn for someone to green-light An American Werewolf in Victorian London and to do so double quick!
After such a slow, contemplative start, it is delightfully shocking to have a crescendo involving a wolf fight that easily caps the Nicholson / Spader fight which concluded Wolf (1994), especially in a film which has also encompassed sub-textual considerations of the relationship between ancient myth and modern (by Victorian standards) Freudian analysis … I can’t be the only one who noticed that the son’s silver bullets were loaded into the father’s gun!
Director Joe Johnson makes the special effect sequences buzz with a drama and a vibrancy, as you would expect from someone who began his career at ILM but, sadly, he fails to draw out of the dialogue and character development scenes, despite sterling work done by a, generally, excellent cast.  I appreciate the slow dramatic build to the big transformation and I bemoan the films that plough straight in with the gore and don’t bother establishing any characters; but, in a werewolf movie, the characters have to be thrilling and the dialogue positively electric to sustain a full hour of screen-time with no wolf.
They aren’t. 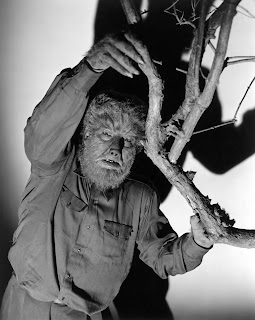 To be fair, they aren’t in Curt Siodmak’s original 1941 script, either.  But they are in the afore-mentioned An American Werewolf in London which similarly waits a good hour before unleashing its wolf on-screen and which retains its crown as the best-written, best-performed, scariest, goriest werewolf film ever.