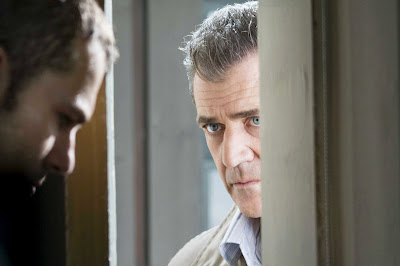 So, Edge of Darkness.  It’s edgy.  And quite dark.
Of course, that’s the ground-breaking 1985 BBC TV serial I’m talking about.  It gazed into the abyss of 1980s political corruption and asked doom-laden questions about mortality … all haunted by Eric Clapton and Michael Kamen’s sparse, jarring score and the fathomless depths of Bob Peck’s pain.  Edge of Darkness also brought director Martin Campbell to the attention of Hollywood.  Already 45 years old, he had worked his way up through directing TV shows like The Professionals (1977 – 83) and Shoestring (1979 – 80) to the pinnacle of Edge of Darkness, which showed a restraint and a maturity that has, sadly, been all-but entirely absent from his subsequent movies.
One such movie is … Edge of Darkness.  Yes, the man who helped make the original an event which is still discussed admiringly 25 years on, has directed the big-budget feature-film re-make.  I fear this will not live quite so vividly in the memory.
The film begins with dead bodies rising to the surface of a lake … something forgotten, long-buried, rising up to cause misery and confusion.
Of course, the main reason this film is considered of significance is because Mel Gibson has himself risen back to the surface after, what, seven years either behind the camera or in the headlines.
Here, he is well-liked copper and proud father, Tommy Craven, just getting on with his life when his daughter suddenly starts vomiting blood – something else unwanted coming up – and she is very soon cold in his arms.  At this point Mel becomes the character we have seen before … a steely-eyed hollow man on the edge of sanity with nothing to lose and no fear of losing it.  His confusion and grief gives way to flashes of fury and an icy determination … ole Mad Mel has resurfaced. 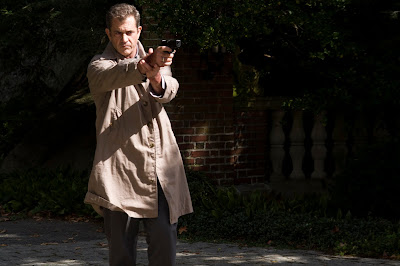 He begins his own investigation into his daughter’s death and that eventually brings him to the attention of (Darius?) Jedburgh a mysterious Security Specialist without portfolio.  Joe Don Baker brought a real charisma to the original role, a flamboyant American amongst a cast of dour, grey Englishmen … Ray Winston here reverses the cultural divide … but plays Jedburgh as a very calm, still man.
I like watching Winston in a film, he is at his best when his obvious physical size is held in  check, threatening to break out into acts of extreme violence at any moment.  He was fascinating in The Proposition (2005) and, of course, utterly mesmerising in Nil By Mouth (1997); but Hollywood has never really found a role that fits him.  This film is no exception.  His role in the narrative is never entirely clear and I fear that is because the point of him was lost somewhere in the adaptation.  His line “I don’t know what it means to have lost a child but I know what it is to not have one” should be redolent with sadness and significance but, instead,  just sounds like fortune cookie rhetoric.
Much about this film is less than clear.  To some extent that is deliberate because, after all, it’s a political thriller – filled with long scenes of people sitting in dark rooms delivering pages of exposition … a sure sign of a political conspiracy.  But then the weighty nature of the conspiracy is interrupted regularly by the obligatory fist-fight, car-chase and shoot-out which interrupt the gradual accretion of suspense that sustained the original TV version through almost five hours.

Again, the original had a faceless, systemic corruption with no single villain at its core, but here we have Danny Huston who, like Winston, has pretty consistently failed to capitalise on the screen-burning potential he demonstrated with his breakthrough performance in The Proposition.  As the evil industrialist, Bennett, he is asked to do nothing more than arch that eyebrow and exudes slimy charm.   He may as well have ‘Bad Guy’ printed on his business cards.
Edge of Darkness doesn’t have the genuine political credentials of 1974’s  The Parallax View or 1976’s All The President’s Men (the films that all conspiracy thrillers want to be) but then it doesn’t have the pace or energy of The Net (1995) nor Enemy of The State (1998) either … leaving it just floating between these two shores.
To be fair to Mel’s performance, you are actually more interested in his journey than in the details of the actual conspiracy.  That’s irrelevant.  What you are actually getting is the story of a man unravelling because his reason for being has been taken away.
As a character, Craven is infinitely more interesting and more convincing in the moments where he is hallucinating conversations with his dead daughter … these scenes are genuinely affecting. 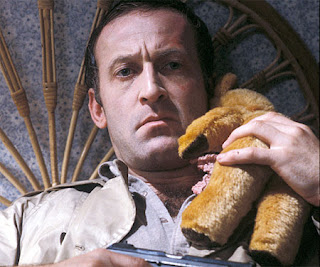 Out of curiosity, I dug out my old DVD of the proper version just for comparison purposes and was very quickly reminded that Peck’s performance in those scenes, when he goes from joy to despair in a moment, joy at hearing his daughter’s voice, despair at realising it is just a memory and he is still utterly alone in the world, are genuinely heart-breaking.  His performance is a master-class in how an actor can allow the calm surface of his face betray the turmoil roiling in the depths below.
Gibson gives of his all and is to be congratulated but, ultimately, this new version of Edge of Darkness merely has a few hidden shallows, it lacks the gloomy depths and solemn clarity of the original.   Ultimately Jedburgh’s coda, in the original, has a grandeur which helped lift the whole serial far above the tame and tepid police procedural it could so easily have been.  Here it just reads like a flaccid pastiche of the end of the Marky Mark movie Shooter (2007) a film that is, frankly, best left to sink without trace.
You see, some things are just best left where they lie, Martin.
Dir: Martin Campbell
Stars: Mel Gibson, Ray Winstone, Danny Huston, Bojana Novakovic
Dur: 117 mins
Cert: 15
Images © Icon Productions & BBC

Email ThisBlogThis!Share to TwitterShare to FacebookShare to Pinterest
Labels: EDGE OF DARKNESS, thriller