ICE AGE: DAWN OF THE DINOSAURS. 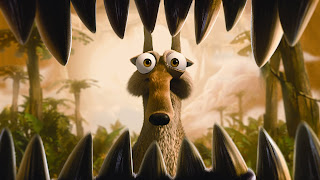 .
Digital is the way to go. I’ve been saying this ever since I saw Bee Movie and Blade Runner: The Final Cut on the same day at the all-digital Vue Cinema in Hull, in 2008. Odd double-bill you might think, and you’d be right, but they served to show the full range of possibilities made available to us by digital projection. The twenty-five year-old Blade Runner has never been sharper and the CGI Bee Movie had real sting. I’d never seen a clearer, richer, more detailed picture anywhere.

Here in Britain, we rarely get to see pristine prints of films. Even first-run films at big cinemas are often hurriedly mass-produced prints, or re-cycled ones from the States, so it’s rare to see a film at its absolute best, even on the big screen. Not a problem with digital. Every ‘print’ is as good as the original, no scratches, no cigarette-burns, no reel-ends missing. It’s exactly as the film-makers wanted it to be.

The only variables, then, are the quality of the venue you see it in and the aptitude of the person running the projectors. Ah, but there’s the rub. A custom-built system, calibrated and maintained to optimum levels and operated by a technician with experience and a real feel for his art (like at Hull's Vue), is as close to perfect as I ever expect to get in a cinema. However, a converted analogue screen, thrown-together simply to draw down some European funding and operated like some circus side-show by an incompetent orang-utan’s dumber, younger brother is, by contrast, only marginally less unpleasant than being force-fed crusty toe-nails by a grinning, gap-toothed chav with ferocious body-odour and a Mockney accent.

Which brings me back to Ice Age 3 (Or Ice Age: Dawn of the Dinosaurs to give it its full, non-sensical title). I didn't see this at a custom-built digital cinema. I saw this in the sadly more-common dodgy conversion.

The digital presentation I saw was flat and fuzzy and pallid in colour. It speaks volumes of the film that I managed to fight through this curtain of exhibitor-incompetence to actually enjoy it!

Our story kick’s off an elephant’s gestation period after the last film, we have Ellie and Manny the mammoths expecting the patter of, frankly, quite large feet, which makes Sid the surprisingly energetic Sloth just plain broody. He stumbles across a clutch of dinosaur eggs (dinosaurs … you know, those things which the first Ace Age (2002) correctly stated had died out millions of years before our mammal protagonists evolved) and, dubbing them Egbert, Shelly and Yoko, decides to adopt them.

Well, of course, the triplets’ real dino-mum arrives (and we all know how much we enjoy a CGI saurian, they were, after-all, CGI’s coming-of-age back in 1993), takes Sid along for the ride and leads the gang to a Pellucidar-type land of the lost where we meet this movie’s star-turn, a buckle-swashing one-eyed weasel called Buck. Voiced exuberantly by Simon Pegg, he is clearly this franchise’s attempt to cash-in on Puss In Boots from Dreamworks' other trilogy franchise: Shrek. He is their guide through the exotic flora and fauna of this subterranean world where pretty-much everything wants to kill you.

As with all of the sensible animations this year, the 3D here is used sparingly and with care, to give depth and detail to the landscape, to help create the magical, fantastical vistas the animators have dreamed up, with only the occasional cheap-thrill sequence designed to be turned into a ride or video-game, such as the spectacular pterodactyl dog-fight.

The slapstick humour is classic Looney Tunes tom-foolery, with the rat-a-tat one-liners reminding me of nothing so much as the Hope and Crosby Road films, while the musical score has all the scope and romance of a Korngold classic. I love the fact that today's animators draw inspiration from source-material so old that, in all likelihood, even the parents of the supposed target-audience kids won’t recognise it. All of which tells me that a good animated film’s roots are growing in soil far deeper and richer than that which spawns your typical, undemanding, lowest-common-dee-dum-dee-dum-dum kid flick. Seeing beyond the short-term demands of this year’s fashion is partly what gave John Lasseter’s Pixar its strength, and Katzenberger's Dreamworks has been wise to follow Lasseter’s lead, therefore it would have been the acme of foolishness if Blue Sky Studios (the makers of the Ice Age films and the backbone of Fox's animation division) had not followed suit.

So, is Ice Age 3 that rarest of things, an artistically successful and enjoyable sequel? Unequivocally yes! The film-makers know that bringing the dinosaurs back is nonsense (one character opines at one point “I preferred you when you were extinct”) but they are cartoon dinosaurs, in a cartoon world. After all, if we are untroubled by the notion that sabre-tooths (sabre-teeth?), woolly-mammoths et al can talk to each-other … in English … then having dinosaurs hidden away in a secret jungle shouldn’t cause us any problems.