HARRY POTTER AND THE SOMETHING OR OTHER 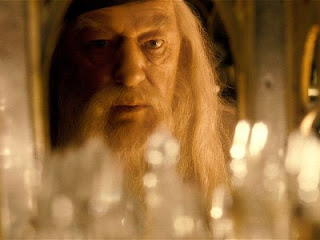 But, here’s a thing … a lot of the people paying their money to watch the film won’t have read the book. And many of them, myself included, won’t have seen the previous film (Harry Potter and the Order of Fried Rice - 2007) since its release two long cold summers ago. So, they, like me, are going to be a bit dazed and confused by the first fifteen minutes or so of this film. Note to the producers: A “Previously on Harry Potter …” like they do at the beginning of 24 or Lost was in order!

Because, let’s face it, this is nothing more than another episode in an ongoing series. There’s going to be no resolution at the end because, even noggin-scratching muggles like me know fine well that it isn’t the end. There’s another, final, book in the series, which they are apparently going to split into two separate films (a sort of Kill Harry pts 1 and 2) for release next year. So Harry Potter and the Half Baked Idea was never going to be anything more than a teaser trailer for next year’s instalments.

Further, those of us who have only experienced these stories on screen have noticed how progressively less twee they have become and, as we move inexorably towards the end, how their ever-darkening tone is more and more concerned with existential thoughts of mortality. I don’t imagine that is mere coincidence that has brought them, at the same time, ever-closer to us here in the real world. (Well, to those in London, at any rate … I guess The Smoke counts as the real world).

So this film starts in our London, with Harry all by himself on a tube station caff at midnight, while the smoke-like Death Eaters (so-called, I suppose, because they seemingly don’t eat much death) roar through the streets overhead, caring nothing for the muggles who see them as they tear the Millennium Bridge apart. I’m guessing they were architectural critics in a previous life. Unravelling a footbridge across the Thames … well, let’s face it, its not quite as iconic an opening gambit as tearing The Golden Gate Bridge apart … but, this being London, I guess it’ll do.

But anyway, why is Harry all on his todd, in a greasy-spoon after dark? Well, because he’s discovered girls (finally) and rather fancies his chances with the waitress. But, just as he’s practicing his best moves on her, his Manifest Destiny comes a-knocking once again in the form of Dumbledore, looking not at all out-of-place in his dress and waist-length beard, standing on a underground platform in our real world.

So Harry stands on his own metaphorical bridge, the one between the two worlds he inhabits … on one side the world of having to work in a café at night to earn a living … on the other, the world of getting everything one wants just by essentially wishing for it. Which way will he go? Stay with the girl or go with the beckoning weirdo in the frock? Well, we won’t have much of a movie if he stays with the girl, so ...

As ever, Gambon’s performance walks the fine line between trustworthy and suspicious. He clearly knows more than he’s letting on and the nagging doubt remains about his judgement of what to tell Harry and when to tell him it. I’m not sure he’s the kind of stranger I’d like my child wandering off with but, as Harry himself puts it, over the years he’s just learned to go with it.

Now, a cynical person might pause to wonder why, after several defeats, ole Darth Voldemort doesn’t have a pop at Harry over the summer months when he’s off on his own, unprotected, hanging around in tube stations in our magic-free world, rather than waiting until he’s back a Hogwarts, supported by his friends and surrounded by the strongest wizards in the world. More of a challenge, I suppose! After all, Voldy is demonstrably the kind of guy who cuts off his nose to spite his face. (Not that you’d know that from this film, since he’s nowhere to be seen apart from during a peculiar “Ooh, that cloud looks like Rafe Feinnes with no nose” moment).

So, Dumbledum takes Harry to meet this year’s deux ex machina supply teacher, Slughorn, played to bumbling perfection by Jim Broadbent, one of the ever-dwindling number of quality British thesps who haven’t already taken Warner’s coin for a cameo appearance here. Slughorn is living in someone else’s house while they’re away. He’s on the run and never stays anywhere for more than a week, so he’s quite relieved to take a place behind Hogwarts’ ever-changing protective walls.

The first school assembly here sings with nostalgia … reminding me of the earlier films, when the kids were more innocent, the atmosphere less doom-laden and the convenient cure-all of magic tricks were less at odds with the fatalistic reality of the films. Even the quidditch match is played on a dank, grey mist-enshrouded and very British day, not the magical, sun-kissed days of yore.

As usual, the few lessons our heroes attend provide them with the convenient solutions to some problems they’ll encounter later, Ron is there to provide comic relief, as ever, and Hermione is there to be emotional and distracting. As the films move on they seem to be increasingly irrelevant to the films, receiving less and less significant screen-time, which is a shame because, when events do kick off, Harry relies on his friends and dumb luck as usual because, let’s face it, he’s never been much cop as a magician.

The only real surprises are in the quality of the acting in that, after six films, Alan Rickman’s Snape finally gets to do some. Meanwhile, stepping out of the shadows after being in the background for several films, Tom Felton has grown into quite the young man, cutting quite a dash as Draco in his sharp suits. Instead of the annoyingly smug, impotent little shit he played in the early films, he’s become something altogether more complicated, positively haunted by the responsibility he has undertaken. Felton has taken his chance to use this performance as his audition for the rest of his career, once Potter’s golden shackles fall away, and credit to him for it.

The other new ingredient here is the sexual chemistry … which was still being resisted in the last film, two years ago (rightly, I think, given the age of the characters) but now, as the age gap between the characters and the actors playing then widens, it seems less exploitative to finally be acknowledging (even in a girly, romanticised way) what kids in their late teens really think about all day. After all, that’s what the Twilight books and films trade on, the Potter franchise will be missing a trick and possibly alienating its audience (who are also in their late teens and twenties now) if it doesn’t follow suit.

The third act, when Harry steps away from the comfortable surroundings of Hogwarts, followed by the shocking revelations of his return, are genuinely creepy and make evident, for those who hadn’t already noticed, what a great debt these later Potter films owe to Tolkein / Jackson’s Lord of the Rings trilogy, Lucas’ Star Wars films and indeed, any of the films that follow Joseph Campbell’s rules of the Hero’s Journey.
For those of us who understand the rules, the ending of this film was always inevitable, it was not a matter of ‘if’ so much as ‘when’. So the only surprises lie in the all-important ‘how’ which, in this case, is dealt with surprisingly well, giving the film a delightfully post-modern twist which, I gather, is quite different from the way the matter was handled in the book. Hm, I might have to go against all my natural instincts and actually have a look at the book. Just don’t tell anyone, alright!?
Posted by Cellulord