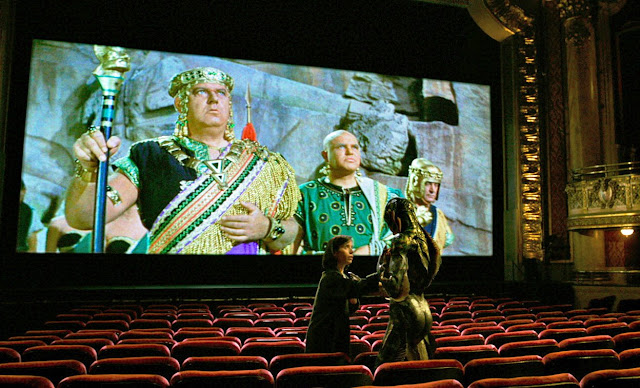 In The Shape of Water, you’ll see a lot of green and aquamarine.  It’s everywhere, from the skin of the mysterious Gill-Man, to the walls of the corridors.  It's like Cinematographer, Dan Laustsen, has deliberately suppressed most of the other colours, to reflect the watery nature of the tale.  Indeed, practically the only time you see a more balanced colour palette, is when Gill-Man goes to see a Deluxe Cinemascope film at the local cinema.
This made me think about the use of colour in recent movies and how, thanks to the efforts of some new kids on the Hollywood block, things seem to be changing.
At one point, in The Shape of Water, Michael Shannon’s character buys himself a new car.  He thinks it’s blue, but the salesman corrects him and advises him that it is teal.
Teal is a colour one sees a lot in films these days.  Amber and teal - or orange and blue, if you prefer - are opposite sides of the colour wheel, which means they complement each other and, therefore, you see them together.  A lot.

Sometimes, in a movie, you’ll get nothing but orange and blue.  Take Mad Max Fury Road, for instance.
Other films are subtler, less vivid.  Take down the saturation and the amber and teal look more like brown and grey.  Take, for example, pretty much every film that Cinematographer Janusz Kamiński has shot for Steven Spielberg, from the moody interiors of Minority Report and Lincoln ...
... To the unforgiving office lights of The Post.

And, if you’re scratching your head over my title ... It’s an Angry Bob quote from the 1990 Richard Stanley film, Hardware.  Another movie which wasn’t afraid to saturate the screen with colour.
Posted by Cellulord