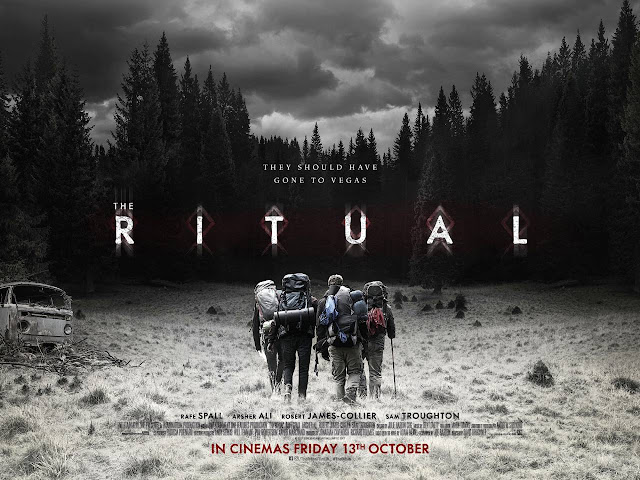 Adam Nevill is a horror writer; he’s British, he didn’t die decades ago, his books aren’t about posh people in the past, and he isn’t Stephen King ... So the chances of one of his books being made into a film are, let’s be frank, virtually zero.  Yet still it has happened.
Given how vanishingly rare British films are (that’s films which are financed in Britain - not like your Harry Potters and James Bonds which are American films that are made here), it’s a tragedy when a Brit film actually gets a nationwide cinema release, then turns out to be ... disappointing.  I mean, nobody really minds when a Hollywood movie is a flop, cos there’ll be another one along next week ... But British films are far rarer and more precious.
I really didn’t want to have to report back that The Ritual was a letdown.  I really didn’t.
Thankfully, I don’t have to - ’cos it’s excellent.

There is a sub-genre within horror fiction which is very on trend at the moment - called ‘Weird’.  It’s not a new sub-genre, far from it; it includes works by M.R. James, Arthur Machen and, most conspicuously, H.P. Lovecraft.  ‘Weird’ fiction tends to be supernatural, featuring an often-unseen thing that preys on the protagonists’ fears.  What sets these stories apart, for me, is the inference that the ‘unseen thing’ in the dark is often unfathomably ancient, leading some people to see it as god, while others see it as the devil.  One of the flat-out weirdest of the weird stories I’ve read, was written over a hundred years ago by one Algernon Blackwood.  It’s called The Willows, and concerns a canoeing expedition, where two friends are terrorised in the wilderness by evil spirits that live in the willow trees.
You can listen to a free talking book version of it here, if you’re interested:
Nevill has mentioned that he was influenced by that story.  And by a hiking expedition he and a few friends actually went on.  I trust they all made it back, safe.  I think he was also inspired, at least in part, by those cabin-in-the-woods movies, where a group of American teenagers are picked-off one by one by an axe-wielding maniac who, rather perversely, we’re supposed to root for.  Tonally, I'd say the book (and the resultant film), also owe something to survival-in-the-wilderness movies like Deliverance (1972) and Southern Comfort (1981) as well, of course, to The Blair Witch Project (1999), rather than to something like Friday the 13th (1980); because the thing doing the slashing here, is a mysterious amorphous presence, hidden in the dense forest.
You can’t see the weird for the trees.
Inevitably, the film makers have made some key changes, when adapting the written word into the film.  The book begins with a shock - what, in TV circles, they call a ‘cold open’, the thing that is going to grab the viewer’s attention and stop them wandering during the adverts.  It’s a technique that has spilled over into film and, to an extent, into publishing - as a way of ensuring readers will buy the book so they can keep reading.
Surprisingly, the film goes a different way.  It has created a whole new cold open - with the scene featured prominently in the trailer - where Rafe Spall’s Luke hides while his friend, Rob, is murdered in a convenience store.  This moment of cowardice adds a whole new emotional layer to the character, and serves as a wedge that gradually drives apart the group of surviving friends who, six months later, all hike into the wilderness in memoriam of Rob, whose last wish it was.

None of this is in the book, but it does serve to create, very swiftly, an understanding of the dynamic between the friends, and explain why four woefully underprepared city boys are trudging through the Swedish woodlands.
Often, when changes are made in the adaptation process, this can alter the tone or the nature of a book; but not here.  The feel of oppressive, mounting dread and sudden explosive violence, is maintained faithfully from page to screen.
Director Bruckner worked on both The Signal (2007) and Southbound (2015) - two portmanteau films where different short stories are loosely connected to create one long story.  Both films were very imaginative, very effective and very unusual.  But they weren’t terribly subtle.  Here, he has allowed himself to be very subtle, giving much of the film’s first half hour over to simple character-building.  He has, essentially, stepped back to just watch his actors act.
All four of his leads - Phil (played by TV regular, Arsher Ali), Dom (played by Sam Troughton, the latest generation of the Troughton dynasty), Luke (Rafe Spall, ditto the Spall dynasty) and Hutch (Robert James-Collier) - give great, humorous, believable performances.  They aren’t stereotypes (as one might expect from a cabin-in-the-woods film) and they all get their moment to shine during the surprisingly long first act, where they just get to bicker and whinge and make jokes at each other’s expense, as they wander further and further from the path.
Although he’s been a busy boy, this is the first time I’ve seen Robert James-Collier on screen.  Apparently he was in Downton Abbey and, therefore, he can pretty-much name his price over in the States.  Yet he chose to make this.  An ensemble piece.  With, admittedly, a small ensemble.  Presumably because it allowed him to show some range.  I can certainly see him doing a nice line of English badguys in big budget American movies.
His flat no-nonsense Manc delivery makes him the natural leader of the group, the clear alpha male; then, when the weirdness suddenly strikes at the end of that first act, the alpha male goes and pees his pants with fright.  That’s the moment when the observant viewer will realise that all the bets are off, this isn’t your standard issue stalk-and-slash and things are not going to proceed in the expected manner.
The cinematography makes the best use of the forests, stressing the uniformity of the verticals, the claustrophobia, the gloom and the lack of anything familiar, even sky.  The chills inherent in the scenario are there to be exploited.  They’re lost, they’re frightened and they can hear something crashing through the undergrowth, tracking them.  At times like that, the thin layer of nylon from which your tent is made, can feel pretty bloody thin.
There are jump scares in here, to be sure, but they aren't cheap and obvious (there are no black cats jumping out of wardrobes, so fear not).  The jumps (cattle-prods as John Carpenter calls them) are earned, and they are used sparingly.  Instead, this film is mostly about building a mood of mounting dread, through silences and the impenetrable darkness around torch light.  They make good use of those torches, to create both tension, and some starkly beautiful visuals.
One major alteration from the book, which I don’t necessarily think is an improvement, comes when the hikers encounter the locals.  Here, these are a tribal commune, like something out of the middle ages or, more tellingly, like something out of The Hills Have Eyes or The Texas Chainsaw Massacre.  In the book, the commune was very different, and something I have never seen in a film.  Still haven’t!
So, at the very least, the book will retain some creepy surprises for you, if you read it after seeing the film.  Which you should.

Yes, you do eventually get to see the ‘unseen thing’ that’s been hunting them, and the FX which bring it together are particularly effective.  There are a couple of images, towards the end, which will live with you.  They’re certainly living with me.  And I am delighted to report that they have designed a completely new monster which owes nothing whatsoever to H.R. Giger.  Giger’s Alien has cast a long shadow over movie monsters for nearly forty years but, thankfully, this beastie is very different ... very disturbing ... very weird!