It all began in 2011, when something that had lain dormant for 21 years was reawakened and stumbled blearily back into the light.  That monstrous entity was ... ‘The 1980s’.  Be afraid, kids; be very afraid.  This nostalgia, at least in movies, was resurrected by J.J. Abrams’ film Super 8.  That was a love-letter to Steven Spielberg’s films of the early 80s, those that he made himself, like E.T. and Poltergeist (both 1982) and those he produced, like The Goonies, and Back to the Future (both 1985).  These films had an inner sweetness at their core, a belief in family values, a suburban American setting, and (usually) a gang of kids getting into scrapes whilst being ignored by adults.

The TV show Stranger Things did the same thing in the summer of 2016, and threw just as much of the other Steve into the mix.  So, this featured obvious influences from Spielberg’s films of the period, as well as Stephen King’s books (most obviously 1980’s The Mist and 1986’s It); not to mention a healthy dose of H.P. Lovecraft.  The show proved to be a phenomenon.  Audiences are clearly ready for this nostalgia, especially audiences who weren’t actually there in the 80s.  I’ve discussed Stranger Things with a lot of people and the ones who are really enthusiastic about it, are the ones who weren’t born then.
I feel that this is important because this isn’t nostalgia for the actual 80s nor, even, for the films and books themselves but, rather, for the simplified image of the world they project.  Spielberg, like his buddy George Lucas, was inspired by his own nostalgia for his childhood, back in the 50s.  So, nostalgia for the films of the 80s is, by extension, nostalgia for the world of the 50s.  A time when people knew their place, when the war had been won, the new enemy was a long way away and, so far as kids were concerned, the world could be encircled with a white picket fence.
Given the chaos we see in the world every day, pining for simpler, more ignorant times is perfectly understandable.  Of course, in a Stephen King book, those white picket fences don’t keep the monster out, because the monster is, like as not, already in.

Although I have read most of King’s books of the 70s and 80s, I haven’t read It.  I know, I know, it’s a phenomenon, it’s his masterpiece; people have been telling me that for thirty years; but it never excited me.  Can’t explain why, unless it was just the sheer intimidating size of the damn thing.  I am a notoriously slow reader and a 1,200 page book would likely take me three months.

And I’ve never seen the 1990 mini-series.  Or, if I have, it made so little impression that I’ve already forgotten it.  I know, I know, it has Tim Curry chewing up the furniture, ’cos his photo has been everywhere on the internet for months.  I remember, too, that it had John-Boy Walton in it.  Beyond that, nothing.
So, I could approach the film cold, with no pre-conceived notions.  Unfortunately, what I couldn’t do, was wipe from my memory all the other horror films I’ve ever seen.  Even though I hadn’t read the source material or seen the previous adaptation, It suffers from over-familiarity.
They have followed the template of the Nightmare on Elm Street films, those immensely successful horror comedies of the 1980s, which are referenced deliberately and obviously here.  The problem with this, though, is that the Freddie Krueger films weren’t scary.  They were wacky and funny and sometimes a bit gross, but never actually scary.
It isn’t scary, either.

This really is a horror film for beginners.  The twenty-or-so-year cycle of media fashion has turned and it’s time, once again, to roll out all those tried and trusted horror tropes that some of us remember from Halloween (1978), and the next generation got from Scream (1996).  The Milennials this film is targeted at have likely never seen this sort of Scooby-Doo caper before and, judging from the film’s astounding box office, they love it.  But I have been watching films since, it feels like, the beginning of time and, for me, a parade of empty jump-scares doesn’t work.
It isn’t scary.
The film has no sense of dread; nothing that was unknown or unexpected, which undermines the few potentially unnerving scenes in here, and waters down the few disturbing images.  The script relies far too heavily on the gang members going off on their own and, when they’re alone, doing something stupid like following a creepy figure into a dark room.
The gang of kids feel so familiar that they are virtually stereotypes.  There’s the token fat kids, the token black kid, the ill kid, the funny kid and the token girl kid.  There’s a few others too but, frankly, that’s just too many kids to keep in one’s mind.  Then, when they find themselves in a dangerous position, there is a lot of screaming.  Really painful high-pitched childish screaming that seemingly never ends.

There’s nothing conspicuously wrong with the film, all of the set-pieces are well handled, the special effects work, the performances are generally good (a couple of the kids are trying too hard, but the others are spot on) and the new improved Pennywise the Clown is an excellent creation.  His squeaky, childish voice is properly unnerving in the opening storm-drain scene.
But it isn’t scary.
And I can feel the scaffolding of the book propping up parts of the script.  Pennywise hints at his motivation but doesn’t really get any significant dialogue with which he can explain himself, until the end so, for the first two-thirds of the film, you don’t really know what he’s up to nor why.   Which makes it difficult to care.
Structurally, the film is a mess, with too much time being spent on unconnected haunting scenes (each kid has to have his/her own hallucination, his/her own haunting) then, when they decide on some action and attack the monster where it lives; they take some casualties, so promptly give up.  They go away and the gang breaks up; simply so the film can get them all back together again five minutes later, then they go back into the creature’s lair and finish the job.  Over several hundred pages of sprawling, epic novel, this probably works; but in a lean, linear movie, it really doesn’t.

We get hints at some of the characters’ back stories - particularly in relation to their parents - but these whip past too fast to make much impression.  I’m sure that King will have filled all this in, in far more detail in the book.  But, for the film script, I’m thinking they should have either given these elements enough screen-time for them to develop some relevance, or cut them out completely.  It wouldn’t have hurt to cut the size of the gang down, either.  The novel will have had time to make a football team of characters distinct and interesting (that is one of king’s great strengths) but movies are best when they are precise and concise.  If there had been fewer children, but they had been better developed, I feel I would have cared more about them.
One ingredient I recognise from other King books, is the depiction of the parents.  Their only function in this film is to fuck up their kids.  That’s it.  One way or another, all of the parents are weak or venal or violent and, yet, the kids are (with the exception of the one-dimensional school bully) reasonably well-balanced healthy kids.  For most of the film, however, the parents are an absence.  Platoons of kids are being taken from the town by Pennywise, and yet we are barely told about it, nor do we see any of the pain this is causing, except to our little gang.  It's there, in the background, fleetingly.  But, again, this either needed more screentime, or no screentime at all.
It’s long been understood (well, it has by me) that short stories and novellas work best as film adaptations, because they tend to be narrower in focus with more economical stories and more manageable cast-lists.  For a Stephen King book the size of a telephone directory (and with a similar number of characters) this adaptation really could have done with being an ongoing TV series rather than a couple of two-hour movies (oh, yes, things aren’t done yet ... this is just Chapter One).
Still, the film has been a sudden and resounding success, so expect it to be followed by a plethora of films featuring supernatural adversaries which have their devilish schemes foiled by gangs of meddling kids.  Scooby-dooby-doo! 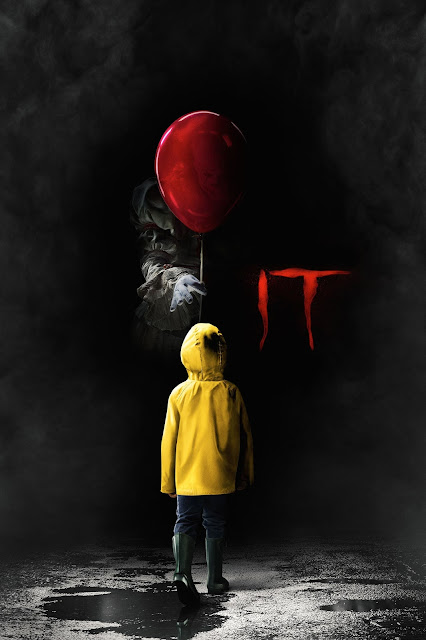