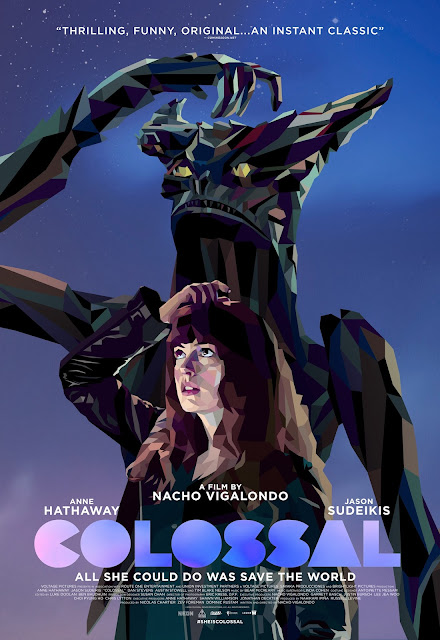 A Nacho Vigalondo film is a strange beast.  He, it was, who brought us Time Crimes (2007), the film in which a character’s story folds over itself, as he travels back through time and tries to save himself and his wife, time and time again.  It very cleverly uses the character’s limited perspective; we never leave his side, so we only discover what is going on, as he does.  It’s kinda like the second half of Back to the Future Part II (1989), without the Chuck Berry music.

Vigalondo also, more recently, brought us Open Windows (2014), which takes the conceit of turning the cinema screen into a computer screen and opening various windows to run several narratives at once.  Both films use a cunning narrative structure and strictly limits point of view, to tell stories about perception and about voyeurism.

There is a deeply disturbing scene at the heart of Open Windows, where movie-star Jill Goddard (Sasha Grey) is blackmailed into performing a sex act in front of her laptop camera, so an insane fan (Neil Maskell) can feed the video to the internet.  This scene is uncomfortable, not just because it is upsetting to watch, but also because of the questions it raises about the viewer’s culpability in the creation of the images they watch.

This isn’t the first film to ask such questions:  The idea of people being tortured live on-camera for the amusement of viewers over the internet has been explored in films like the Gregory Hoblit / Diane Lane film, Untraceable (2008), Bernard Rose’s gothic horror Snuff Movie (2005), and in several police procedural TV shows - notably Criminal Minds and several of the CSIs.  It’s such a common motif, that it even has its own entry on the invaluable TV Tropes site, here.

It’s also worth mentioning that the much-reviled Brian DePalma, from the earliest days of his career (with Hi, Mom! in 1970, Sisters in ’72 and Phantom of the Paradise in ’74), was asking difficult questions about the relationship between audience, voyeurism and the unwary victim.

I mention all this, because Vigalondo has, with Colossal, taken the involvement of the voyeur with the viewed to a whole new level.  He’s reworked the idea for the generation accustomed to the idea of fighting a war by remote control from the other side of the planet.

Now, I say that Hathaway is improbable in the role, not because her performance is bad, it isn’t.  It’s a fine study in failure and rudderless depression.  She makes Gloria complicated and contradictory and very human.  And it’s refreshing to see the hoary old trope of the burned-out gin-soaked writer being played by a woman.  What I struggled with was her being this depressed and this soaked in booze ... So young.  Hathaway is in her thirties now, but looks younger.  One would expect a writer to be driven into the bottle by their despair and cynicism to the point where they can no longer function, when they’re in their 40s or, maybe, 50s.

But, let’s gloss over that and move on.  Gloria’s boyfriend, Tim (played by Mr is-there-a-film-he-isn’t-in-this-year Dan Stevens), has put up with her chaotic lifestyle for a long time, but finally has had enough and throws her out.  So she goes back to her home town, which is shot in autumnal browns and greys and looks as downbeat and depressed as the characters within it feel.  Not an accidental use of mise en scene, I suspect.

Gloria immediately bumps into Oscar, her old friend from the old school old days, who just happens to own an old bar.  She follows him to the bar, and only has eyes for his tequila bottles.  This isn’t the most therapeutic location for her.

Jason Sudeikis is wonderfully down to earth as Oscar, in this, the first ‘straight’’ role I’ve seen him give.  He and his bar-buddies are all gentle, easy-going souls, who are a bit damaged, a bit lonely, but holding themselves and each other together.  It could so-easily have turned into one of those life-affirming romantic comedies from the early 90s.  Doc Hollywood anyone?

But, where’s the colossal monster, I hear you cry.

Well, it’s in Seoul.  It strides through the city, causing widespread devastation and leaving colossal footprints, very much like the little ones Gloria leaves when she walks through the town’s abandoned playground.  Everyone sits around in shock, watching the horror unfold on 24-hour rolling news.

The world unites in support of the stricken Korean city, and braces for an assault from this giant bipedal monstrosity, since no-one knows where it will strike next.  Then it goes back to Seoul.  The film makes the point that, as soon as the rest of the world realises this terror is only happening to Seoul, the cease-fires collapse, the warm-fuzzy sense of international collaboration evaporates and everyone goes back to hating each other; because no one feels motivated by a disaster that is happening somewhere else.

Gloria notices that the strange beast scratches its head, just as she does.  Slowly, realisation dawns that whatever she does in that abandoned playground, the monster does too, on the far side of the planet, as though somehow being remote controlled by her.  When Oscar steps into the playground, a giant robot joins the giant kaiju and smashes its way through the sky-scrapers.  So, both Gloria and Oscar have this strange, magical super-power.

Where Gloria is wracked with the guilt at the death and destruction she has somehow inadvertently caused on the other side of the planet, Oscar is remarkably calm and level-headed about it.  At first.
Their relationship suddenly changes, becoming much darker, as Oscar's true nature is quickly revealed.  After which, the conflict between them, which has repercussions on both sides of the planet, is edge-of-the-seat stuff, involving great acting from the two leads, audacious film-making from Vigalondo and, in one scene in particular, exceptional use of sound - when we can hear death, destruction and screaming, but we can’t see it.

Gloria goes from a woman whose defining characteristic is the lengths she will go to to avoid responsibility, to feeling like she is responsible for the woes of the world.

This is a film which buries its themes deep.  It is concerned with the power of social media, a tool which can have world-altering influence and consequence, but which is fuelled by raw emotion rather than considered and reasoned argument (cough-Trump-cough), and which allows one to divorce oneself from the culpability of one’s actions through distance and anonymity.  The film considers (through metaphor) the lengths people will go to, to become internet celebrities (as Open Windows did, before it).  Colossal looks at the way that fighting real wars, with real casualties, has become a video-game simulation fought by kids in front of video screens.  You pull a trigger in America; a building full of real people explodes in the Middle East.  This is an issue which is also dealt with, head-on, by the excellent Eye in the Sky (2015), which I encourage you to seek out.

Colossal is not a film big on logic.  For one thing, it’s hard to believe that Seoul wouldn’t have been evacuated after the first attack, leaving no innocent civilians to stomp under foot on subsequent visits.  But, hey, if you can accept colossal beasties and giant robots, a little extra suspension of disbelief shouldn’t be a problem.  What the film lacks in logic, it more than makes up for with heart and, if you’ll forgive the pun, soul.

The trailers made this film look like a whimsical comedy, and the film certainly has its light, comical moments, but it also has depths unhinted-at in the marketing.  And, just one word of warning: if Colossal confuses you at all, don’t scratch your head.  Lives are at stake.