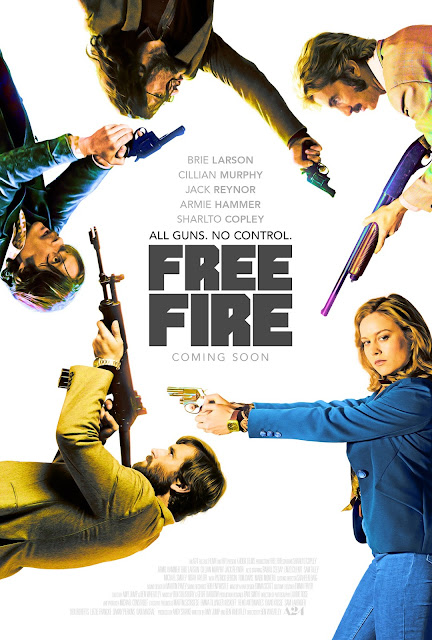 Free Fire is engaging and witty, and has one or two nice surprises in store.  With an opening dialogue exchange which includes the line “I look like I tried to fuck a reluctant panda bear”, you know you aren’t in for an entirely serious time.
What you are in for is the little micro-budget Brit-flick that could.  That could, in point of fact, cast a pretty impressive list of, if not A-listers, certainly upper-echelon B-listers!  But, I guess that’s what happens when you get Martin Scorsese onboard as a producer.
Ben Wheatley, and his co-writer (and missus) Amy Jump, demonstrate that they have real range, delivering this film on the back of the chilly social satire of High Rise (2016) and the esoteric so-called ‘English Eerie’ of A Field in England (2013) and Kill List (2011).
Here we have an action comedy, light on plot and motivation, heavy on the gun-shots and the snappy one-liners.

I did think, while watching it, that Free Fire would make an interesting double-bill with High Rise, which Wheatley made immediately before.  That film concerns itself with society’s elite, steadfastly refusing to admit that anything is wrong, or that any of it is their fault, while their society unravels and descends into primordial chaos.  This film features the scum of the earth, who already know and accept that the world is chaos, but hold everything together through personal attributes such as adherence to politeness, chivalry, loyalty to family or maintaining an emotional distance.
As with High Rise, which is sort of set in the 70s, but not really, this film doesn’t tell us the period directly; but the sideburns, porn-star ‘taches and wing collars let us know that we’re embedded somewhere in the heart of the 70s.
Cillian Murphy (getting to use his actual voice and accent for once) heads a motley crew of Irish villains (presumably IRA, although the film is careful to leave this vague) who are in America to buy a van-load of sub-machine guns.  Now, the perceptive viewer and student of Chekhov may be tipped-off by the presence of a large number of guns and a lot of unchecked testosterone, into thinking that things are not going to go by the book.  Unless that book is a novelisation of The Wild Bunch.
The point of no return comes very early, when the first bullet is fired and, thereafter, it’s gunfire all the way.  This film will come in useful for people wanting gunshot sounds effects, 'cos they’re all in here.  I mean, seriously, all of ’em.

Plot-wise, there isn’t much to tell you.  Several of the characters take a dislike to several other characters (I know, who’d’a thunk?) and spend much of the movie trying to kill that person.  There is a very extended sequence - the bulk of the second act, in fact - where the cast are crawling around on their elbows, throwing insults, complaining bitterly, and shooting wildly at each other.
It is to the credit of the cinematography (by Wheatley’s go-to guy, Laurie Rose) and the editing (by Jump, again) that you can follow all these over-lapping conversations and simultaneous story threads, whilst also maintaining a reasonably good idea of where everyone is in relation to each other.  That said; don’t expect to ever know exactly what’s going on because the camera stays down at floor level with the shooters, gritty and claustrophobic.
I don’t think I’ve ever seen a film where so much footage was shot from about a foot off the floor.  Not even Spielberg’s ET (1982) made such use of low angles.
“So, Ben, what’s my role?”
“Well, Brie, basically you spend the first twenty minutes fending off the advances of a cheesy South African.  Then you spend the rest of the movie crawling around in the dirt, on your belly.”
“Great, I’m in.”

Although Free Fire lacks the visual poetry of a John Woo, the wry eloquence of a Tarantino, and the relentless invention of Gareth Evans’ The Raid (2011), it has creditable echoes of all of the above.  There are also several chuckles to be had - mostly courtesy of Sharlto Copley doing his usual turn as the pompous, self-deluded Vern.  You’ll also enjoy the comedy stylings of a surprisingly likeable Arnie Hammer, who remains calm, collected and cynically philosophical throughout.  And, of course, there’s the always reliable Michael Smiley (returning, as Wheatley’s good luck charm) who is, if there’s any justice, teetering on the brink of a big Hollywood breakthrough with this.
The action is also set to a wonderfully bouncy score by Geoff Barrow & Ben Salisbury (who also scored 2015’s Ex Machina), as well as featuring the second outing of Creedence and Run Through The Jungle in less than a month.  It’s now officially Brie Larson’s theme tune, since it also featured alongside her in Skull Island!
So, make 90 minutes to see Free Fire.  And see it at a cinema with good sound, to make the most of those gunshots and ricochets.  Oh, and keep your head down.