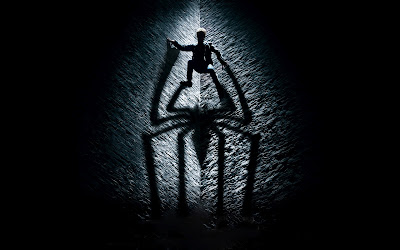 And the first film I am going to try this on for size with is The (so-called) Amazing Spider-Man.

First off - and just to get this off my chest – I don’t like origin stories.  If origin stories were so important, then every movie would be one.  By which, I don’t just mean every superhero movie … I mean every movie.  But they aren’t, are they?  The rom-coms or zombie holocaust movies you watch don’t spend their first hour telling you the entire life-story of every character, do they?  No.  In fact, most movies don’t bother with being an origin story, it’s something that's almost unique to the Superhero genre.   Makers of other genres have realised that we are sophisticated enough to understand and identify with characters without having to sit through their home movies and baby photos.

Now, I appreciate that sometimes you need to see scenes from a character’s past to understand their personality, motivations, background or whatever … But a pre-title prologue or a couple of informative flash-backs should cover that – if a few simple lines of dialogue won’t.

So, when they announced that The ‘Amazing’ Spider-Man was a re-boot and an origin story, my heart sank.  It’s only ten years since we had to go through all this with Sam Raimi and Tobey Maguire.  Do we really have to sit through the bullying, the spider-bite, Uncle Ben’s death and yacketty-schmatty, blah-blah-blah all over again?  Yes, it seems we do and we can’t even do it quickly.  We have to spend fully half of this two and a quarter hour movie revisiting familiar ground.

They’ve taken much of their inspiration from Brian Bendis’ ‘Ultimate Spider-Man’ reboot of the comic which began to be published in 2000, rather than the Stan Lee / Steve Ditko original which dates from 1962.  Raimi very-much cleaved to the original in terms of tone, so to go elsewhere was a sensible way to push the franchise forward.  Except, since the differences are mostly cosmetic, why bother going back to square one?  That still makes no sense to me.  Can you tell?

Andrew Garfield’s rendition of Peter is quirkier and more physical than Maguire’s.  He’s more temperamental and more argumentative and, therefore, possibly more convincing as the sarcastic wise-cracking Web-Head.  Maguire always seemed too sweet and earnest to do the trade-mark Spidey one-liners I grew up reading in the comics.  But you only get a couple of examples of this humour in this film.  So, not really The Amusing Spider-Man, then.

When he is learning to use his new powers and dealing with his sometimes-sticky, sometimes-not fingers and proportional-strength-of-a-spider (as they used to call it) Garfield is very funny – He obviously has a gift for physical comedy, even if he is a bit to lanky and good-looking to prat-fall convincingly.  But his emotions are on-and-off so quickly, it is difficult to become emotionally involved in him.  This is not necessarily a fault of the performance so much as the frantic pace of the editing and the brevity of such scenes.

Then you’ve got the fact that they have decided to have Gwen (played by Emma Stone) be the focus of his affections instead of Mary-Jane.  This is being true to the original 60s comics that they are, otherwise, ignoring.  So why bother making the change?  To be fair to Stone – her rendition of Gwen is far less annoying than Bryce Howard’s was in Spider-Man 3 (2007).  The lengthy scenes with them stumbling through their courtship … Just don’t sparkle.  There is no spark between the two characters.  I didn’t care about them, or their relationship.

Visually, the film is quite dark, shot mostly at night with deliberately subdued colours … Which are even dimmer in 3D, of course.  I presume this palette and shooting style was part of abandoning the light-hearted tone of the Raimi films and an attempt to make this new rendition seem grittier.  More ‘street’.   However, the frankly lame story contrives to make that seem foolish.

Where the first half was unnecessarily long-winded, the second half leaps from half-formed plot-point to plot-point with scant regard for logic or continuity.  Plot-lines are abandoned or just plain forgotten about, time-jumps occur without warning (Connors all-of-a-sudden has a lab in the sewers) and major details are skated over in a montage (such as the creation of the web-shooters and the creation of the costume and the existence of the Spider-Sense).

But, beyond that, there are the frequent plot contrivances.  If this is supposed to be Spider-Man re-imagined for a more sophisticated twenty-first century audience, why are we insulted by the sort of lame co-incidences and conveniences that we might have expected to have seen in the 70s TV version of Spider-Man?

Plot Contrivance #1:  Peter investigates Connors, who just happens to be his father’s ex-partner and, it is strongly hinted, is the reason for his father’s disappearance.

Plot Contrivance #3:  Peter just happens to bump into Mr. Ratha, who just happens to drop a folder containing papers which just happen have the 00 logo Peter is investigating from his father’s notes.

Plot Contrivance #4:  Peter’s father bred the spiders that will turn him into a super-hero.

Plot Contrivance #5:  Connors just happens to have a ‘Ganali Device’ designed to distribute drugs through the air over an entire city.  Well that won’t be turned to nefarious ends at the end of the film!

I could go on and so, since my 1,000th word happens to be this one, and I have therefore failed, I shall go on!

Rhys Ifans plays Connors.  He’s not the most endearing of actors … His characters always seem to be cold and emotionless and that stops you liking them (unless they’re in grubby Y-fronts, of course).  He is to-all-intents-and-purposes playing the same role as Willem Dafoe in the 2002 Spider-Man and Alfred Molina in the 2004 sequel – the scientist driven mad by his own creation.  Boiler-plate Jekyll-and-Hyde stuff, in other words!

His motives are, essentially, noble, although he has clearly made the old deal-with-The-Devil, in the form of the afore-mentioned Mr Ratha who represents the unseen Norman Osborn.  The Connors of the comics was always a tragic character rather than out-and-out evil.  There is the merest hint of that here, given that his research is primarily a way for him to grow himself a new arm.  Which it does.  But that, of course, is not all he grows.  The first transformation into The Lizard is dealt with well, in the traditional Jekyll-and-Hyde manner, but the creature into which he changes reminded me of nothing so much a Ray Harryhausen’s Ymir from 20 Million Miles to Earth (1957). 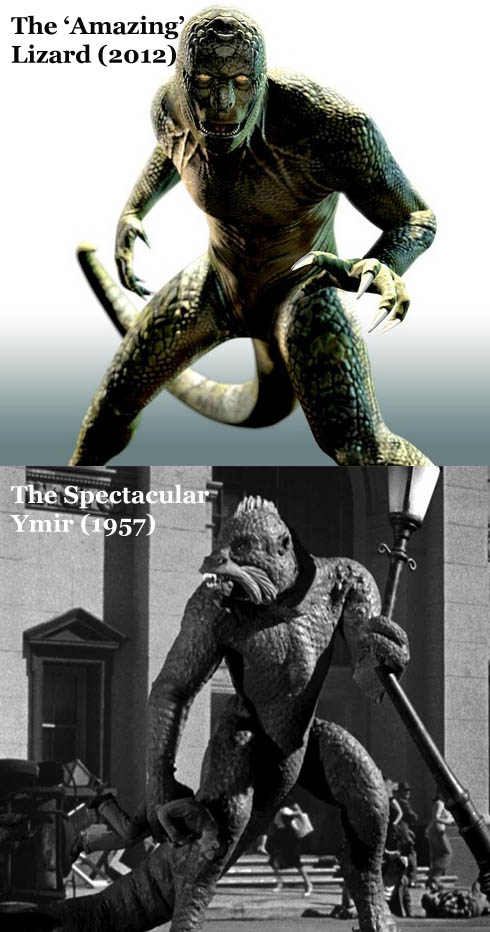 The first time he and Spider-man meet – on the bridge – is the stand-out sequence in the film and is the only time Garfield has the on-screen soul that Maguire so effortlessly demonstrated.

So, there are one-or-two laugh-out-loud jokes for the humorously-challenged (the teenagers sitting around me were laughing like drains … I smiled occasionally), there are impressive visuals and one-or-two moments that set the senses buzzing.  But there is also a lot of padding, a lot of problems with tone, a lot of insulting the audience’s intelligence and memory and, ultimately, far, far, far too much time spent showing us scenes we can vividly remember from last time round.

We were promised ‘The Untold Story’.  What we got instead was ‘The Oft-Better-Told Story’.  What they should have done (had they but asked my advice) is go with the Amazing title (rather than Spider-Man 4), cast a new director and a new actor, but carried on.  Sure, change the tone, that’s fine … That happens in the comic every time a new creative team takes over, that’s to be expected … But going back to square one and starting again?  That was unnecessary and foolish … And boring.

And so, finally, we get to my favourite bugbear … The 3D.  Well, given that the colours were washed out and the night scenes were distractingly dim … I took my 3D glasses off, which immediately improved the colour and brightness I was seeing.  But, interestingly, for the vast majority of the film, this made no difference.  When you watch a 3D film without glasses, it should be blurred.  Unwatchable.  Yet The (self-styled) Amazing Spider-Man wasn’t.  The long-shots were a bit blurred, the fight-scenes and web-slinging scenes were extremely blurred (I put the glasses back on for these) but I’d say that, for a good 80% of the film, watching without glasses made absolutely no difference.  So much for expensive, cutting-edge 3D technology.

There has already been some very detailed analysis of this film and I would point you to the piece, which deals with some of the plot-threads that were left dangling from the film, and uses some of the footage released in the trailers to illustrate that this material was shot, but obviously chopped out.  (Which makes one wonder if we’re going to be treated to a three-hour ‘Director’s Cut’).  Anyway, it is on Badass Digest and you’ll find it here.

Then the second piece I’d like you to read is one of Cinema Blend’s excellent ‘To 3D Or Not To 3D’ columns where they spell out far more methodically than I, what’s wrong with the extra dimension in this film.  You’ll find that piece here.