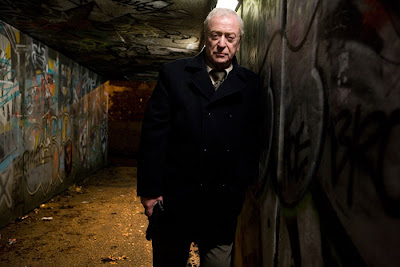 There is a particularly unpleasant, but nonetheless irresistible thrill to be had from watching a vigilante movie. Possibly because we share the cold, clammy feeling of vulnerable impotence common among all who do not take the law into their own hands, possibly because, however liberal our sensitivities, we wish we had the nerve to throw caution and the rule of law to the wind; whatever base, tribal instinct it is that these films tap into, it’s a powerful one.

This latest rendering of the Death Wish (1974) gestalt takes place on a bleak English housing estate and, although it articulates thirty years’ worth of prejudices we have about such places (since a few of them went up in flames in the early eighties), it is set very much in the today.

It begins with a sequence shot on a mobile phone of the feral children of the estate killing a young mother for committing the cardinal sin of … well, of pushing a pram across their turf when they were bored.

This sets the tone of what is to come. But first, a change of pace. We are introduced to Harry (Sir Michael, of course) a stiff, sanguine old man, making his breakfast in his grotty little flat, very much as his namesake Palmer did in the opening moments of The Ipcress File back in 1965. Now, as then, there is an air of sad loneliness about Harry. Even the pub he frequents has the air of a funeral parlour. When he ventures out through the cold grey streets where the only splash of colour is the ugly, illiterate graffiti, he avoids the ominous darkness of the subway, because of the uncaged animals he can hear in there. The estate is an untamed wilderness where the young run wild and everyone else keeps their heads down and their eyes averted.

The fact that Harry used to be a Marine is rather clumsily introduced into a discussion with his sole surviving friend, Leonard (played by David Bradley) and even the dumbest of the low-brow mouth-breathers Harry fears would note the significance of this revelation.

The kids of the estate all talk like black Jamaicans, as poor white-boys with no identity or positive role-models tend to do. Deprived of any direction or schooling, all they have is their rage. They don’t know what they are raging against, of course, nor why, they just know that they must.

Meanwhile, inevitably, Harry’s own rage is building until, finally, he reaches flashpoint. He does have a target. And a purpose. The drugs industry has destroyed the estate … so that’s where he starts.

Harry is determined to protect himself. To this end he enters the Hellish abode of the utterly loathsome Stretch, played with captivating, spine-tingling menace by the deathly Sean Harris – who recently played a vicious thug cop in the mini-series Red Riding and is best remembered for his mesmerising turn as Ian Brady in the Moors Murders TV movie See No Evil (2006). This sequence is quite extraordinary, and signals the transition from Harry’s normal, mundane world to a far darker, scarier, uncontrollable place ruled by fear and adrenaline. The music drones like wind in pipes, like memories haunting Harry, as Stretch symbolically uses a World War Two Luger as a crack pipe. The explosion of violence that follows is inevitable and horrifyingly satisfying.

And Harry is unleashed. He becomes a predator, stalking the darkness he so-recently feared, striking suddenly and viciously and never looking back. It speaks volumes about the consistent quality of Caine’s career and the sheer range of characters he has brought to the screen, that he so effortlessly makes Harry sympathetic without being maudlin, then allows hi to evolve believably into a stone-cold killer. We see flashes of Harry Palmer, Jack Carter even Mortwell from Mona Lisa (1986). Harry is the sum of everything good that Caine has ever been on screen.

Unfortunately, the film is less convincing than Caine’s performance. It begins to take liberties with logic, the police presence is ridiculously small given the death-toll, and the prints Harry obligingly leaves everywhere would have brought even the few coppers on show to his door very quickly. But the velocity of his rage is so intoxicating you don’t care about logic, you just want him to continue his cull.

Then, as any graduate of a good script-writing course will tell you, there has to be a twist, a reversal, when suddenly the rug is pulled from under the audience. This is handled, I must confess, very cleverly and very satisfyingly. The film turns into a sort of modern urban Wild Bunch (1969) at its climax, but manages to remain convincing throughout.