Blu-Ray: Drag Me To Hell 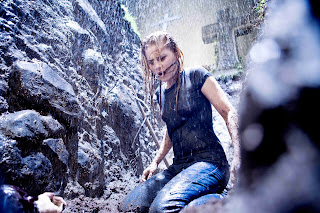 .
Without actually referencing Tales from the Crypt, Vault of Horror, The Twilight Zone, The Outer Limits or any of those horror staples of the dim and distant past, Sam Raimi has evoked their spirit with Drag Me To Hell.

Nowadays, if you want to read the formative works of Wally Wood, Jack Davis and Joe Orlando (oddly, those old EC comics are remembered for the artists rather than the writers) et al, or watch The Twilight Zone, you need to get yourself a second mortgage to buy the deluxe hardback editions and DVD box sets. They are something that only the connoisseurs are aware of today, yet, two generations ago, they were something every kid knew intimately.

Their stories were replete with curses and demons and ancient evil just waiting for its chance to corrupt the modern day. Last-minute rescues and redemptive final acts were not the purview of the EC horrors. Very bad things happened to good people for no good reason, without warning and without mercy.

There was always a thread of black humour in these tales and a delight in the suffering inflicted on the poor schmuck embroiled in their own nightmares. All of that is true of Drag Me To Hell. Even it’s name rings with the lascivious joy of the awful.

Our heroine, Christine, is a banker. Well, there you go, if ever there was a sector of society that deserve to be dragged to Hell … but, no, Raimi makes her as human, as confused and as sympathetic as possible, because we need to spend ninety minutes watching her suffer. We need to care about her.

She refuses credit to a derelict old woman, who curses her, then unleashes upon her an utterly unrelenting and entirely hilarious attack in the bank’s underground car-park. Because this is a proper horror film, it has its fair shares of cattle-prod stabs, but doesn’t rely on them in place of genuine thrills, it adds them to the mix of gross, disturbing, incomprehensible and wildly creative terror that Raimi unleashes.

Unlike your typical, tedious, stalk ‘n’ slash, you genuinely have no idea what is going to happen to this poor woman next. This film doesn’t follow a pre-determined, proscribed and predictable path of interlocking clichés leading to the inevitable reassuring ending.

Well, of course, it does follow the trail of generic signifiers laid down by the hundreds of films, books and comics that have come before, but at least these leave enough loop-holes for experimentation … we are never entirely sure when the suspense will burst into unpredictable bouts of violence. And the demon that’s after her is a real multi-tasking deity, attacking her in several different ways, so she never knows where to turn.

Of course, going to meet your boyfriend’s parents for the first time, whilst under a demonic curse, was always going to be a mistake.

Back in his pre-Spider-Man, pre-Hercules days, Raimi was known for his © Sam Raimi Shots … which generally involved seeing the scene from the perspective of an inanimate object and, as often as not, through an extremely wide-angle lens. As he has matured, these have got subtler, but are no less mischievous. Here he introduces an important fly by having it land on the camera’s lens.

Eventually, as the eye-popping gore became more and more visceral, more and more ludicrous, the audience with which I saw the film, realised they were watching a comedy. During the inevitable séance, a goat is brought to the table. Well, the dumbest audience in the world is gonna get the gag by then!

The only way to deal with insane levels of violence and horror … is to laugh at them. Most film-makers don’t seem to get that. Raimi did right from day one with The Evil Dead (1982). There are moments in here which are just as powerfully disturbing and as delightfully contrived as in that film, which many still feel is his masterpiece. Whether we’ll still be talking about Drag Me To Hell in almost thirty years is, of course, quite a different question.

Email ThisBlogThis!Share to TwitterShare to FacebookShare to Pinterest
Labels: blu-ray, DRAG ME TO HELL, horror