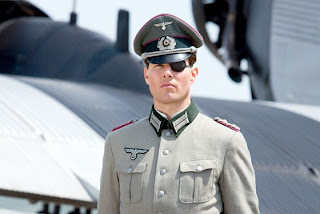 The Film:
.
As you probably already know, this film tells the true story of the conspiracy to assassinate Adolph Hitler during the Second World War … but, the problem is, you probably also know how successful it was. Fair enough, knowing the ending at the beginning didn’t do Titanic (1997) any harm but, with that, the spectacular sinking of the ship was almost incidental to the simpering love-story and the presence of lovely Leo, which drew so many teenage girls to the film and left nary a dry seat in the house.

This historical re-enactment features lots of wrinkly old men in uniforms talking about killing someone of whom the typical GCSE History student has never heard. I can’t imagine that will do much for the Hannah Montana/Twilight crowd, somehow.

As we know, whenever the Americans want to cast boo-hiss bad guys, they look to the Brits; well this film is set in a nation of boo-hiss bad-guys. So they’ve raided every theatre they could to assemble a veritable army of British thesps. All the usual suspects are there: Lord Sir Kenny Branagh (would any depiction of officious cruelty be complete without him?) Dame Bill Nighy (as twitchy as a violin-bow, and about as thin), the dictionary-definition of ubiquity: Tom Wilkinson and none-other than … Eddie Izzard? Oh, okay. Branagh compares Germany to Sodom … a place that is redeemable, if only one good man can be found there. Step forward the towering presence of … Tom Cruise … as Colonel Claus Von Stauffenberg.

I wonder what the Germans make of the Americans attempting to rehabilitate their history entirely with Brits and Yanks (with the single conspicuous exception of Hollywood’s favourite rent-an-Aryan, Thomas Kretschmann)? With any luck, they’ll remake The Great Escape(1963) with the Germans playing the prisoners and Bruno Ganz in the Steve McQueen role, then we can find out how they feel.

The most effective scenes in the film are when we see Hitler himself – played by TV bit-part specialist David Bamber with a stab at a German accent (credit to him, no-one else bothered) because there is actually a real sense of threat as he sits there in his torture-chamber office, surrounded by the twisted freaks of his High Command.

Despite its trappings, this is definitely not a war film. After the first few moments, there are no battle-field scenes at all and, as such, it probably fairly reflects the war as it was experienced by the officers who ran it from behind their desks. So, it isn’t a hot-war film but it isn’t really an effective cold-war conspiracy thriller either because, ultimately, the suspense evaporates through our knowing more than the characters do. Worse, we simply don’t care about them because they are, without exception, stiff-necked, officious, middle-aged nazis. Grey people with grey morals in grey uniforms.

Clearly, director Singer and Co’s intention was to inform the world that there was resistance within the German elite. But, since we know their endeavours were futile and since we can’t care about any of them as people – because they are all one-dimensional soldiers – then this knowledge seems hollow and insignificant.

Maybe if Stauffenberg’s family weren’t side-lined so quickly by the film, maybe if we’d seen events from the perspective of the women and the children who were not responsible for the self-inflicted plight Germany was facing in the dying months of the war, maybe then we might have given a damn.

Maybe Singer should have funded the production of a proper documentary about Stauffenberg and got Cruise to narrate it, then he could have spent two years getting back to what he does best – making efficient, grow-up movies that do know which genre they occupy.
.
The Disc:
.
The short-comings of the film itself are more than compensated-for by the cornucopia of extras presented on the disc which are a pretty-exhaustive lesson in the reality of The Conspiracy.

This, in-keeping with the tone of all the extras, is a serious and collaborative commentary. It doesn’t fall into the sycophantic “Oh, he’s wonderful … she’s amazing” habit that many commentaries do, instead it’s all about the truth of the conspiracy and the efforts to retain that truth in the film-making process. Interestingly, Cruise views the film, at this point, from his perspective as the producer rather than as the actor.

I love writer commentaries! I particularly love collaborative ones, where writers discuss the sculpting of a script, the moulding and remoulding to find the shape we now have. Here, they both talk about the truths behind the elements they included and discuss some of the elements they elected to leave out. Fascinating.

The Journey to Valkyrie – 16 mins

As with everything else on this disc, this documentary is more serious-minded and detailed than the usual making-of puff-pieces you can sometimes get on the more lazily-prepared discs. Say what you like about Cruise, no one will ever charge him with being lazy and, appropriately, there’s nothing lazy about this disc.

The documentary points out that Singer has dallied with war films in the past – given the background of Apt Pupil (1998) and the opening moments of X-Men (2000) but they weren’t war films and this isn’t either.

As you would expect, everyone sucks up to Cruise. I don’t know, maybe he genuinely does inspire and deserve this depth of affection and fealty in those he meets in person but for those of us who’ve never fallen under his spell, it still feels vaguely distasteful and deeply suspect.

For example, they do discuss the well-publicised problems that the production had when shooting in Berlin, but don’t even approach addressing the press’ allegations that this was because of Cruise’s religion. Inevitably, there’s no mention at all of the ‘S’ word … but then, the press stories could well be a lie, in which case - why should his religion be a matter of discussion? Well, because something that exists in the popular imagination needs addressing especially if it’s wrong. This isn’t.

All the behind-the-scenes interviews talk of their striving for authenticity – and the effort they went to is genuinely impressive – but, once again, the elephant in the room is the absence of German voices in the film. All that authenticity is completely undermined by the British and American cast.

The Road to Resistance – 9 mins

This guide to the real locations used in the film begins by reiterating the point which is made several times on this disc – that all Germans were not Nazis. They didn’t all join Hitler’s party, they didn’t all believe in his politics.

Point made, we have a brief travelogue, rather like something you might expect to see as a package on a magazine programme, where Stauffenberg’s grand-son gives us a guided tour of some of the real rooms The Conspirators met in, some of which are now museums, some of which the film actually used.

The point this short makes again and again is about how important it was for Berliners that this story be told right. Which brings me back, again and again, to my problem with them using Brits and an A-list American rather than genuine Germans. Surely, if they were so committed to the story, they wouldn’t worry about trying to turn it into summer block-buster and would have made it in German!

This concentrates on the brief battle scenes at the film’s beginning, which I was amused to see were shot in The Mojave Desert (“Which look more like Tunisia than any place on Earth … except maybe Tunisia!”). This is ultimately about explosions, but has its place.

This short talks about the use of real vintage aeroplanes in the film’s opening moments, rather than the expected CGI planes added afterwards. Blah-blah-authenticity. Thing is … CGI is inevitably cheaper, so why did they go to all the time and trouble? Well, when you see trained-pilot Cruise actually landing one of the vintage Junkers and then walking around with a grin a mile wide, it all becomes clear … they were toys for Tom to play with. Bless.

Part of the reason this film comes across as quite so cold and stark is because of the architecture and locations … which are, as often as not, genuine. The very walls around the actors exude the chilly reality of the period.

The film-makers admit that shooting in Berlin (rather than further East in the tax-advantageous ex-Soviet countries) cost more … but we already know why they made their decision.

Singer talks about how determined he was for his film to not look black and white but be vibrant with colour. I just wish he’d told his colour-grading staff that, because the film they produced is a subtle mix of blue, grey and green with the occasional shock of a red flag. Brrr.

The disc’s real surprise is this almost-two-hour film by prodigious making-of documentarian, Kevin Burns, which is hardly referred to on the packaging but is, in some ways, better argued than the case made in the main film itself.

Being an American documentary, it does feel the need to have music playing perpetually in the background because American documentarians seem to think that their viewers are incapable understanding verbal communication without a piece of music underscoring it to tell them how to feel about it.

Never-the-less, the film maintains a dispassionate tone and concentrates on the facts of the period, explaining the wider perspective of how Hitler came to power and why some of his own citizens might want him dead. Thankfully, it uses subtitles rather than dubbing the interviewees (another technique American documentaries are, unfortunately, likely to employ) and is altogether far more grown-up than the documentary channels of satellite TV have taught me to expect American documentaries to be.

This feature-length extra is better than the main feature and is the most compelling reason to buy this feature-packed disc.
92nd Street Y: Reel Pieces.

This is an on-stage interview between the 92nd Street Y Cultural Centre’s Annette Insdorf and Tom Cruise and Bryan Singer. Although Dr. Insdorf is clearly in the thrall of Cruise and directs the lamest of questions at him, as often as not Singer answers them.

As with everything else on this disc, the discussion does strive to be serous, with references to Truffaut establishing a certain level of cred.

In the interview, Singer makes the point that it was important to the real Conspirators – because they believed it would be important to Germany - that Hitler be brought to book by Germans. Well, surely, if that was the case, if they are truly honouring the memory of those conspirators … they’d have allowed Germans to be in their film.

Alright, point made. I’ll get off me soap-box now.
.
And, if you really need everything spoon-fed to you, I give this a Cellulord Rating of: Film: CC Disc: CCCC