There’s barely a weekend goes by when one of the first two Despicable Mes (2010, 2013) doesn’t turn up on TV.  It’s even more ubiquitous than those Ice Age films (2002 - 2016).  Initially, the popularity of the first film perplexed me, since its 80s pastiche was clearly just a pallid impersonation of Pixar’s The Incredibles (2004).  The quality of the animation isn’t even in the same league as, say, Kung-Fu Panda (2008); let alone Pixar.  Its humour doesn’t have the cunning wit of the Shrek films (2001 - 2010) and its characters aren’t as cosplayable as Disney’s.
So, what does it have?  Charm!  Buckets of charm.  There are the three girls, each cuter than the next ... There’s Steve Carell’s borderline racist comedy Bond-villain voice ... What else?  Oh, yeah ... The Minions!  Writer/Director Pierre Coffin very quickly realised that they were a potential gold mine, so significantly bolstered their involvement in the second film - they went from Santa’s Little helper types (with a scatological sense of humour) to being a central part of the plot.
Then, of course, there was The Minions Movie (2015) - which achieved the near impossible feat of having its triumvirate of protagonists drive the narrative and sustain the whole movie - whilst still talking gibberish.  It’s worth mentioning that the bulk of the Minion voices are provided by Coffin himself.
So, the first film had charm and mischievous yellow people.  The 2nd Despicable Me, predictably, had even more of both.  The Minions Movie increased their profile.  So, how was the third film going to up the ante on all this? 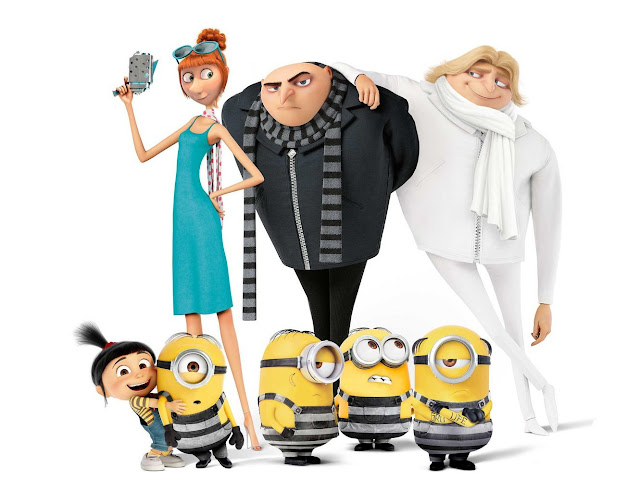 Well, they’ve gone with having a script that’s a shapeless mess, featuring several unconnected stories all jostling for screen time.  There's the wacky super-villain plot, from Despicable Me 1 and The Incredibles, there's the Minions-wander-off-by-themselves plot, from the Minions Movie.  There’s the teenage-girl-discovers-boys story from ... Well, just about everything.  Oh, and there's the 'I suddenly have a brother?' plot from The Addams Family (1991), Star Trek V (1989) and, y'know, Return of the Jedi (1983).
The film is also peppered with almost as many digs at Disney as it is with over-familiar 80s pop songs, all of which feel very tired now.  The whole project feels oddly under-baked.  The second film achieved the near impossible, by being better than the first.  The spin-off movie (also with Coffin in charge - as co-director) succeeded in being different enough, that it still retained that all-important charm.
But this time, it felt like they really needed to think it through a lot more ... Work the ideas harder ... Come up with something different.
Wiig has fun with her enlarged "momma bear" routine.  It’s also worth mentioning that some of the Minions scenes are worth the price of admission alone.
But, over all, this film feels like focus-free film made by a committee.  And not a very talented committee at that.
Hopefully, for the next one, Coffin will let some of that Gallic weirdness out of the box again and come up with something genuinely unexpected.
That said:  here’s something unexpected ... I never thought I’d find myself missing Russell Brand, but the absence of the mostly-incompetent and entirely-pointless Doctor Nefario in this film, was a significant disappointment.  Who knew?
Posted by Cellulord