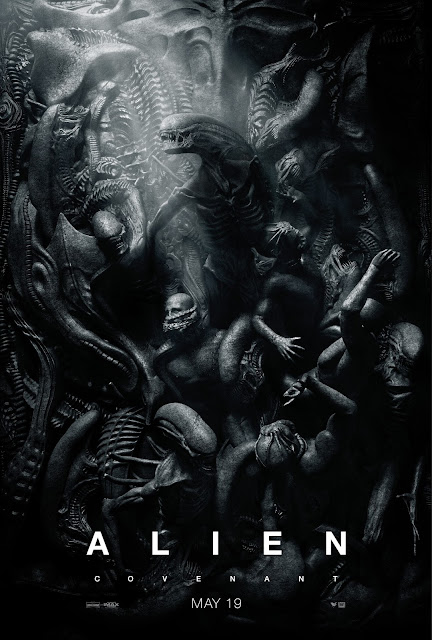 I don’t generally do prequels.  I’m also not the greatest fan of sequels.  And this is a sequel to a prequel, so ... Double jeopardy.

Of course, part of the reason I don’t do prequels is Prometheus (2012), the film which promised so much (not least Ridley Scott’s return to science fiction after 30 years) and delivered so little (by way of a coherent narrative with a satisfying conclusion).
My review of it is here.

I’m happy to confirm that this film does answer some of the questions which were left hanging over the cliff at the end of Prometheus.  For example, we find out what happened to David and Elizabeth Shaw.

This is very much Ridley’s passion project.  It’s almost like, as he approached the end of his career (he is 79, after all, although he has the energy of a man half that) he is finally finishing what he started with his breakthrough film.  A recent interview for Radio 4’s Film Programme (which you should still be able to listen to, here) betrayed that it is still a sore point for him, that the Alien sequel went ahead without him; so he seems to be reclaiming his creation with these prequels, as though he wishes to wipe out the memory of Cameron’s Aliens.

This film chooses to start with a prequel to the prequel, in a scene which echoes his other legacy piece, Blade Runner; we begin with an eye opening.  (Blade Runner will have been much on Scott’s mind over the last couple of years, as he green-lit, produced and, ultimately, decided not to direct its decades-in-gestation sequel).  In this case, the eye belongs to Michael Fassbender’s eccentric synthetic, David.  He discusses parenthood with his creator, Peter Weyland (Guy Pearce, in a brief cameo, revisiting his performance from 2012), and asks “Who made you?”  Synthetic people ruminating on the philosophical questions of life was, of course, a driving force in Blade Runner, so we’re on comfortable Scott territory here.  The journey to find The Engineers in Prometheus began with this question and, for me, exploring the results and ramifications of asking it, is this film’s most interesting theme.

But, before we get to that, we need to herd some new cannon-fodder into the line of fire, so, please welcome on stage the crew of the colony ship Covenant.  As is usually the case in an Alien film, these people are all fast asleep, tucked-up in their cryo-pods, until something goes wrong with their ship and they all wake up.  Whether the solar flare that wakes them is an act of God, or possibly of a lazy script-writer, once they’re awake, they intercept a mysterious signal from a mysterious Earth-like planet so, being explorers, they decide to go and investigate.

As plot contrivances go, it’s not quite up there with Kirk being stranded on a random planet and running into a random cave and just happening to encounter Spock (a la 2009’s Star Trek) but it’s still terribly convenient that they just happen to be in the right place at the right time to discover the derelict Engineer spaceship from Prometheus (Ridley does like his derelicts) and, thusly, stumble upon the only other Weyland synthetic in all of space.

Yes, David has been patiently waiting for someone to arrive for ten years.  He’s been keeping himself busy, mind, studying the flora and fauna of his adopted home-world, and covering the walls of his dark cave-like quarters with drawings and dissections of all kinds of creatures (one does wonder where he gets the endless supply of paper and pencils ... But, he is in the middle of a forest, so I suppose he could make his own, if necessary).  This is partly why he is fascinated by the Covenant’s resident synthetic - Walter.  Their scenes together are a delightful interplay of classical allusions (David is well-read and pretentious with it) and subtext.  David clearly looks upon Walter as being another fascinating case-study; just another exotic form of life to study.  The bonding between them takes the form of David teaching Walter to play his flute, which they both take turns blowing and fingering ... And, yes, it has quite deliberate sexual overtones.

Sex and death is a theme throughout (as, let us be honest, it was in the original 1979 Alien), from the xeno-erotic poster that caused quite a stir when it shot its load over the internet a few months ago, to the ultimate wish-fulfilment scene of the alien fucking up a couple while coupling in the shower.  That sequence, particularly, felt like an Alien copycat, giving in to the baser instincts that Scott’s original was always tasteful enough to suggest but not show.  Other sequences are subtler, particular in relation to David and his asexual birth, fascination with the reproduction cycle of the xenomorph, and cocky self-confidence because he knows he doesn’t have to die (he doesn’t have a six-year life span, you see).

The religious imagery also runs through the film like a pulse; not, surprisingly, in the presence of Billy Crudup’s character, Chris Oram, who mentions that he is a person of faith, then proceeds to do nothing with that.  If anything, David is the one with faith, because he had met his maker and his maker’s maker and has demonstrated (to his own satisfaction) his superiority to all of them.  He has faith in himself.  Hence why he starts to think of himself as a god.  Or possibly Lucifer.  His assessment of his creator:  “He was human.  Entirely unworthy of his creation.”  No narcissistic, psychopathology there, at all, then.

What of the visuals?  Well, you know you’re in safe hands with Ridley.  From the spaceship which has echoes of the Nostromo (the first Alien film is set about 17 years after this film), to the gorgeous landscapes on the Engineer Planet, to the now all-too-familiar innards of the Engineer spaceship, and the cyclopean expanse of the Engineer city ... (Which HP Lovecraft fans, will no doubt, become quite agitated about) that is decorated with thousands of twisted, fossilised Engineer corpses, as though the entire species died out in one place at one time.

I can’t believe I’m thinking this, but part of me is feeling it would be a good idea for Ridley to bring modern CGI animation to bear on his original Alien, and release a version that has the visual splendour that the new films are capable of, with none of the limitations of budget and technology from the 70s.  A bit like the wash-and-brush-up they gave to the original Star Trek TV series.  Then the original film can be watched and appreciated in the same way as the films that lead up to it.

The problem with the film, and you knew there’d be one, is that it is far too reliant on that standby of trashy horror movies: Intelligent characters doing stupid things for no good reason.  These films can’t function unless the victims stupidly put their own necks in the noose and, as such, they kinda deserve what they get.

I mean, presumably these pioneers have been trained in how to work as a team, how to improvise (since they’re years away from help) and how to keep calm in an emergency.  And yet, the very moment things start to get hairy, the entire team flies apart so fast, the audience gets hit by the shrapnel.  They make bad decision after bad decision; they split up; the captain goes off by himself into the dark; they think about quarantine regulations when it’s too late; one of them opens fire with a machine gun inside a delicate, complicated and highly combustible space ship (why, in God’s name, do they even have machine guns?) and, of course, women can’t run without falling over.

So, in short, don’t get too attached to anyone, don’t bother learning their names or developing an affection for them; cos they mostly ain’t gonna be around long.  Don’t bother wondering about how the Alien grows so big so fast (cos, to be fair, that happened in the original Alien too).  And don’t bother trying to follow the action of the big fight at the end, cos the camera’s too wobbly and the editing’s too fast.  In which case, I just switch my brain into neutral and wait for normal narrative to resume.

On the plus side, this film features James Franco’s most likeable performance.