FUN WITH THE WALKING DEAD 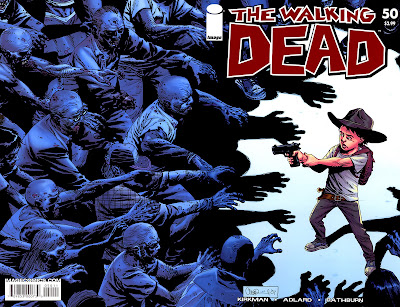 I'm not a big fan of the zombie genre.  It seems so reductive and repetitive.

Yes, I admire Night of Living Dead (both the original 1968 version and Savini's much-better-than-expected 1990 remake) for their political nous.  Romero's original was shocking not just in the savagery of its violence but also in that its main character was black.  Savini's remake took our deep knowledge of the original and used it as a weapon against us and added a positive, powerful feminist message - which was (and, sadly, still is) unusual.


Dawn of the Dead (1978), on the other hand, is one of my absolute favourite films.  Even given the various diluted and adulterated forms we've had to suffer over the years.  Its scope, as well as its oh-so 70s, post-Watergate, post-Vietnam political ambition marked it out as a remarkable piece of work that also happened to be remorselessly bleak and horrifying, like a good horror film should be.  Romero is one of the few writer/directors who, far from being limited by the horror genre, was liberated by it and explored new, extraordinary stories he could tell with it - rather like David Cronenberg and Clive Barker, among a select few others.

Then, after Romero, rather like the undead themselves, the evolution of the sub-genre pretty-much ground to a halt.  The rules were set: they eat flesh (though no-one knows why), they shamble (something to do with the ankles), they out-number the living (otherwise there's no drama) and they win (after the credits roll).  Those rules stood, pretty-much unchallenged, for nearly 25 years.

Then, after decades of being all-but ignored, zombies rose up again, initially with Danny Boyle and Alex Garland's reinterpretation of the rules: 28 Days Later.  Their zombies weren't slow, because they weren't dead.  This seemed to fire off the long-dormant imaginations of a million young men and, seemingly without preamble, zombies were everywhere.

There are vast numbers of fan-fiction zombie stories out there, in every conceivable medium (including musical theatre) but, unusually, mainstream cinema was also incredibly quick to react.  The 'Zombie Apocalypse' sub-genre was born.  Within two years we had a perfectly serviceable remake of Dawn of the Dead, we had the far superior parody of it, Shaun of the Dead and, in comic-books, we had The Walking Dead.

There is something quite special about The Walking Dead.  Maybe it is the starkness of the black-and-white art; maybe it's the change of medium from big-screen to graphic-novel; maybe it's the fact that it's really a soap-opera with the occasional zombie incursion; whatever it is, I thoroughly loved The Walking Dead comic when I discovered it a few years ago.  It was different.  Not in the sense that it was the first zombie apocalypse comic - Deadworld had that distinction back in 1986 - and it wasn't even the first comic called The Walking Dead - that seems to have been this standalone story from 1972 and they both, of course, took the title from this 1936 film by mad Michael Curtiz.

I can't explain why TWD affected me so strongly - unless it's because I bought the first fifty issues in one go and ploughed through them in two straight days - giving me a sense of intimacy with the characters which picking it up an issue a month would struggle to emulate.  The point is, I genuinely cared for these characters and there were moments when I was viscerally scared for them.  I even wept at one point.  First time in nearly 25 years a comic has moved me to tears.

Then, of course, along came Frank Darabont's TV version (only now debuting on terrestrial TV here in the UK of A).  Suddenly, all those zombie motifs, transplanted back into the medium that spawned them seemed sadly pedestrian.  Even the last couple of episodes where it deviates substantially from the comic seemed ... Familiar.

That's not to say I didn't enjoy the show, nor that I don't wish it well and won't tune in to series 2 because I do and I will.  But the TV version didn't seem as intimate nor as chilling as the comic.

I heartily encourage you to read it!

You might also enjoy visiting a typically exhaustive fan site called Walking Dead Theatre which, among other things, creates graphics like the one below to compare comic to TV show:

Meanwhile, the point of this typically meandering post - a couple of pieces of Walking Dead humour that have emerged over the last couple of days.

The first is a comment on the nature the comic-book series (which is now some 80+ issues in) and explains quite why writer, Robert Kirkman, may very well get to write it until he retires, as he says he happily will:

The second reason to be cheerful was reported originally, I believe, by Obsessed With Film, although it was quickly picked up by the national media and you may, therefore, have already seen it.  It was, needless to add, an excellent piece of 'accidental' viral advertising for the show's upcoming encore on Channel 5: 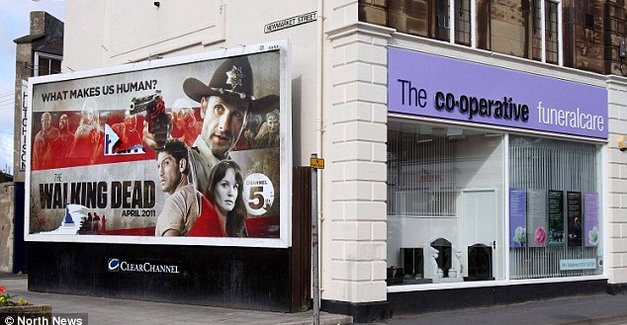