.
Six weeks before Avatar was released, it’s a fair bet that no one outside the SF and film nerd communities had heard of it.  Until the posters and trailers appeared at the cinemas, its existence had been hotly anticipated on websites, weblogs and in the occasional magazine, but nowhere where civilians would see it.  That was the marketing approach Cameron and Fox used: A last-minute unleashing of blanket coverage.  History indicates it was a strategy that worked, especially in persuading people that the film was an event that had to be experienced in the new Holy Gimmick of 3D.
Well, Disney decided to use a similar approach for their 3D ‘event’, Tron Legacy.  About a month from release, it was appearing on the covers of magazines like Empire, Total Film and, inevitably, Wired.  A storm of trailers were unleashed spoiling, seemingly, every detail of the film and, of course, the all-important ‘3D’ logo was wheeled out at every opportunity (indeed, Dazed and Confused magazine’s Daft Punk themed cover was itself in 3D)!  It seems to have worked.  As I write this, the film has been on world-wide release just over a week and it is already set to cover its huge $170 million production budget.
That, of course, is despite the fact that the film – like Avatar – received almost uniformly lukewarm reviews with the most oft-evoked word being ‘disappointing’.  Makes a reviewer think he might be wasting his time.  Sigh.
I decided I was going to see the film in optimum circumstances … So, as soon as I had the chance I took myself off to the IMAX at Bradford because that’s how you experience an event!
There’s no denying the excellence of the work done by the design and effects people.  The world inside The Grid is overwhelmingly complex and detailed and beautiful.  But it’s very dark, almost monochrome, where the original Tron (1982) was vividly colourful.  It was, and remains, a visually unique film.  There really isn’t anything out there that looks quite like it.  Not even this sequel.  But, the darkness is a bit of the ole pathetic fallacy, where the environment metaphorically represents the tone of the piece.  The world of The Grid is once again under the boot of an oppressor (a sort of re-boot, I suppose … hah … heh … sorry).

If people are as disappointed by the film as the reviews indicate, I feel that this is where that disappointment begins:  Tron Legacy is essentially a remake.  Yes, the film-makers have made big noises about not simply re-making the film but, by having the oppression of the MCP and Sark reproduced, albeit by a new bad-guy, that is, in essence, exactly what they’ve done.
The film begins well enough, concentrating on the son of Jeff Bridges – Sam – who is conveniently almost as old as the first Tron film.  His dad has been missing for over twenty years meaning Sam is, to all intents and purposes, an orphan.  Now, if a little alarm bell is ringing and you’re wondering “Hang on, are they doing The Hero’s Journey?”  I can, sadly, confirm they are!

As with the first Tron, young Flynn breaks into Encom, the evil electronics empire, plays with the computers and gets himself digitised and uploaded onto The Game Grid.  He gets to play Frisbee with his identity disc, he gets to ride a Light Cycle.  So far so just like the first film.  But I was okay with this because, I reasoned, they are re-familiarising us … It has been 28 years, after all. 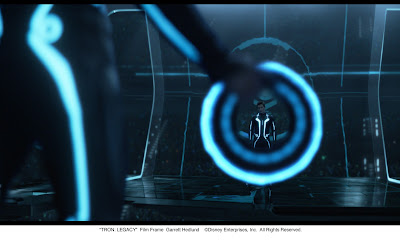 But then there is very little progress made beyond that.  Just like last time, the world is contained in a stand-alone computer, just like last time, the ‘elixir’ is contained on a data disc and, just like last time, there’s a long chase involving elegant and fragile flying machines.  Whilst I realise that they have deliberately left a few loose ends in this film for any possible sequel, I feel that not employing any of the concepts and terminology that people these days use in relation to computers, gives the film an oddly anachronistic feel.  There is no reference to viruses or fire-walls or search engines or any of those phrases that even compu-luddites like me use on a daily basis.  This story should have been about unleashing The Grid onto the internet.  The world of computing has transformed beyond recognition in the three decades since the first film and this second film, if only to justify the ridiculously long wait, needed to acknowledge and employ that.
It’s not like the film-makers were unaware of the world of web 2.0.  Legacy’s first act shows Sam working as a ‘white hat’ hacker leaking Encom’s new operating system to the world, just to annoy them; yet this particular first act gun just isn’t used in the third act.  That’s a problem.  Indeed all the first act stuff with Encom and its new board, and its chief programmer (one Ed Dillinger) is a red herring since, once Sam enters The Grid, there is no reference back to the real world at all.  That’s also a problem; it’s sloppy structure and lazy script-writing.
In the middle act there are several lengthy exposition scenes after father and son are reunited (I don’t think that’s giving anything away too spoileriffic) and, moving past the fact that clustering too many lengthy dialogue scenes together is, again, lazy script-writing; one of these exchanges details the emergence of ‘isomorphic algorithms’.  Now, while the film is quite vague about what these are, it does make it clear that they are a sort of software 2.0, a huge evolutionary leap in computing.  It is their arrival that sparks the political oppression which Flynns Snr and Jnr must combat.  Now, to me, this isomorphic story was far more diverting and filled with dramatic possibility than the chase movie we have here and, since it’s about software evolving and improving, it would have handed on a plate the narrative the film-makers needed to introduce The Grid to our modern wired world.  I’m just saying.
Finally, one of the eccentricities of the first film is that, for no clearly discernible reason, it is not named after the main protagonist - the character who we follow into The Grid - but rather one of the programs he meets in there.   This gives Legacy another imbalance:  They needed to continue with the Tron name for brand recognition, which means they have to find some active role for the Tron program.  So they’ve got him playing Bobba Fett.   Yes, really.  Then, in the last few moments, they give the character a pointless epiphany in a sequence which feels like it was assembled in the edit-suite as an after-thought.
So, it’s fair to say that there are problems with the script but, as I mentioned at the beginning, there is nothing wrong with it visually.  Director Kosinski is another graduate of high-concept CGI-heavy commercials (if you’re interested in knowing more, have a look at his website here) which means he has a great grasp of visuals but, as with so many directors who make their way into big movies through that route, this doesn’t prepare you to control a full length film nor, for that matter, does it ensure you can get a great performance out of an actor.

This is why, I suspect, recent Oscar-winner Jeff Bridges gives two completely by-the-numbers performances: One of them in person, in his Jedi pyjamas as Father Flynn and the other, over on the other side of the Uncanny Valley, as his much younger self via the miracle of motion capture.  I didn’t mind that Clu comes across as one-dimensional, nor that his CGI face was as fake and dead-eyed as one of Zemeckis’ cyber-puppets because, after all, he’s a piece of software.  It’s entirely appropriate for him to look manufactured.  But to make his character and his motivation so clumsily one-dimensional is unforgivable!
So, is there anything to enjoy here?  Actually – yes - quite a lot.  The film is gorgeous and absolutely worth seeing on as big a screen as possible.  The design and execution of the world and the vehicles that travel around it is a constant delight although, I concede, this may be partly because it reminds one so much of 1982’s other great Syd Meadathon: Blade Runner.  The Light Cycle sequence is mind-blowing (even if I did have a bit of a grumble about them no longer going in straight lines) and the Light Dragonfly Flying Thingy chase is, if anything, more so.  Possibly because it really needs a quick “Don’t get cocky, kid” to make it complete!

Of course, everyone looks ravishing in their skin-tight, fluorescent costumes and heavy pan-cake make-up, particularly Olivia Wilde and Beau Garrett who, despite being required to do nothing more than function as one-dimensional ciphers, manage to give their programmes a certain sass.  One imagines that they must have been ravenous after being unpeeled from their costumes because they certainly wouldn’t be able to eat while wearing them!

Garrett Hedlund does fine work as Sam, giving him just enough maturity to deal with all the gosh-wow visuals.  It must be very difficult to make a vanilla good guy stand out in such a gigantic movie, but he manages.  The ever-reliable Michael Sheen (presumably on his days off from working as the wabbit on his other Disney flick, Tim Burton’s Alice in Underland) also shines (literally and figuratively) in a wonderfully camp turn as a sort of Aladdin Sane cum Jimmy Saville nightclub owner.  But what ties the whole package together wonderfully and dramatically is the music by Daft Punk.  Yes, it was leaked all over the interweb months ago; but listening to some dodgy MP3 divorced from its proper full-screen context is, well, unsatisfying.

I might even be persuaded to make the case for this being the soundtrack of the year.  For a sample of what I'm wittering about have a quick click of this:

Despite all of the problems with script and direction, I genuinely do feel that this is a film worth watching on as a big a screen as you can manage.  Further, it’s worth watching twice!  Why twice?  Well, because that dry-mouthed sense of disappointment that may mar your first viewing will be gone for the second, and you can get on with just basking in the visual and auditory glory of it all.
Anthony Burgess reputedly said that there is no such thing as ‘reading’ a book, there is only ‘re-reading’ it.  The first time you read it you are merely getting to grips with the characters and the story.  The second time you can appreciate the art, the craft and the love that the author put in the book.  Only with a second reading can you fully appreciate and understand a book.  Well, I firmly believe the same is true for (most) films.  I genuinely feel that, especially when a film has failed to live up to often unrealistic expectation, a second, more level-headed viewing of it can be a revealing and intensely pleasurable experience.  So, yes, I will be going to see Tron Legacy again and I expect to see more, understand more and enjoy more than I did first time.  (And no, before you ask, this doesn’t mean I’m going to re-evaluate any Adam Sandler films … One has to draw a line somewhere!)
Dir: Joseph Kosinski
Stars: Garrett Hedlund, Jeff Bridges, Olivia Wilde, Bruce Boxleitner
Dur: 127 mins
Cert: PG
.
Posted by Cellulord