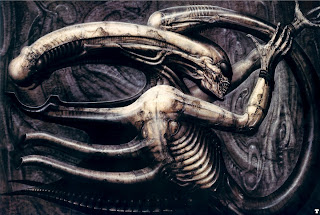 THE GIGER COUNT.
When Walter Hill had been warming up the director’s chair on Alien, he had nixed D’OB’s idea of importing some obscure Swiss artist to design the aliens. When Hill left, O’Bannon took note of his replacement’s fine-art background and slipped Ridley Scott a copy of Hans Rudi Giger’s book ‘Necronomicon’.

Giger himself describes the events that led him to world-wide recognition: “In 1976 I had completed two paintings, ‘Necronom IV’ and ‘Necronom V’, in which two long-headed creatures appeared ... In his search for a credible Alien creature [Scott] came across these two paintings and decided on them for the full grown Alien, using the words ‘That’s it!’”

Far from supplying just a few sketches then taking the money, Giger came over to England, set up in a corner of a soundstage at Shepperton and began building the prototype alien with his own bare hands.

For his part, Scott found himself captivated by a photograph of a gargantuan Nubian athlete towering over the diminutive German film director Leni Riefenstahl, and that swung the casting decision for him. So, the seven foot African actor, Bolaji Badejo, discovered drinking quietly in a pub near Shepperton, was hired to play the monster.

As is usually the case with any actor who is to wear a prosthetic suit - a mould was made of his entire body, from which a plaster cast was made, which was then mounted on a stand in Giger’s studio. The artist then set about turning his drawings into three dimensional reality, with clay and bones, an air-conditioning duct, bones, screws, condoms and bones.

“He wanted clay, basic sculpting materials and he also wanted bones.” O’Bannon recalls, “As many bones as they could lay their hands on. They ended up buying veterinary supplies, medical supplies, and the little sculpting studio turned into a bone yard. They got him a rhinoceros skull.”
His characteristic ‘biomechanical’ style of mixing cross-beams with ribs, pipes with entrails and pistons with penises was the perfect choice to compose not just the title star, but everything that was truly alien about the film - the planet, the derelict spaceship and, of course, its fossilised occupant. Giger put his air-brush to use, painting knotted and disturbing landscapes - then fashioning miniature models out of more bones, bits of motors, pipes and wires, all blended together with vast quantities of Plasticine. Persistence of vision insists that we see the human in his designs, and therefore we are drawn ever-further in to them. It is a style as seductive as it is repellent.

Model maker Peter Voysey had the unenviable task of interpreting Giger’s paintings of the vaguely pelvic alien derelict into a twelve-foot wide model space-ship. Then he had to put together the huge, full-size ‘space jockey’, the fossilised alien the astronauts find inside the derelict. These models were then painted and detailed by Giger himself.

For his distinctive role in creating the special effects for Alien, Giger shared in the 1979 Academy Award for Best Special Effects. It is a shame that his relationship with Fox, and the Alien series, has subsequently deteriorated:

Although not involved in the sequel, Aliens (1986), he was credited for ‘Original Alien Design’. For Alien 3 (1992) he came back; however, his experience on that film left him far from satisfied: “I was cheated out of the Oscar nomination received by that film because 20th Century Fox gave me the credit ‘Original Alien Design’ again, instead of ‘Alien 3 Creature Design’ as was my rightful title in accordance to my contract.”

In an open letter issued in response to the fourth film Alien:Resurrection (1997), which doesn’t mention his name in its credits at all, Giger points out that: “The creatures in Alien:Resurrection are even closer to my original Alien designs than the ones which appear in Aliens and Alien 3 ... The designs and my credit have been stolen from me, since I alone have designed the Alien. So why does not Fox give me the credit I rightfully earned?”

I very much doubt if Fox is in too much of a hurry to open up its copyrighted properties (like the Alien series) to public domain. Consequently, it wants credit (or, preferably, cash) where it is due. Seems a shame it isn’t prepared to allow all those who work with it the same privilege.

It is therefore only fitting to leave the last word on the matter to Herr Giger himself: “As for those responsible for this conspiracy: All I can wish them is an Alien breeding inside their chests, which might just remind them that the ‘Alien Father’ is H.R. Giger.”

All H.R. Giger quotes come from his open letter, written originally to Twentieth Century Fox on November 13th 1997, a copy of which Herr Giger kindly made available to the author.
.
The illustration Necronom IV is © HR Giger.
Find out more about Giger's work at his website: http://www.hrgiger.com
.
Posted by Cellulord